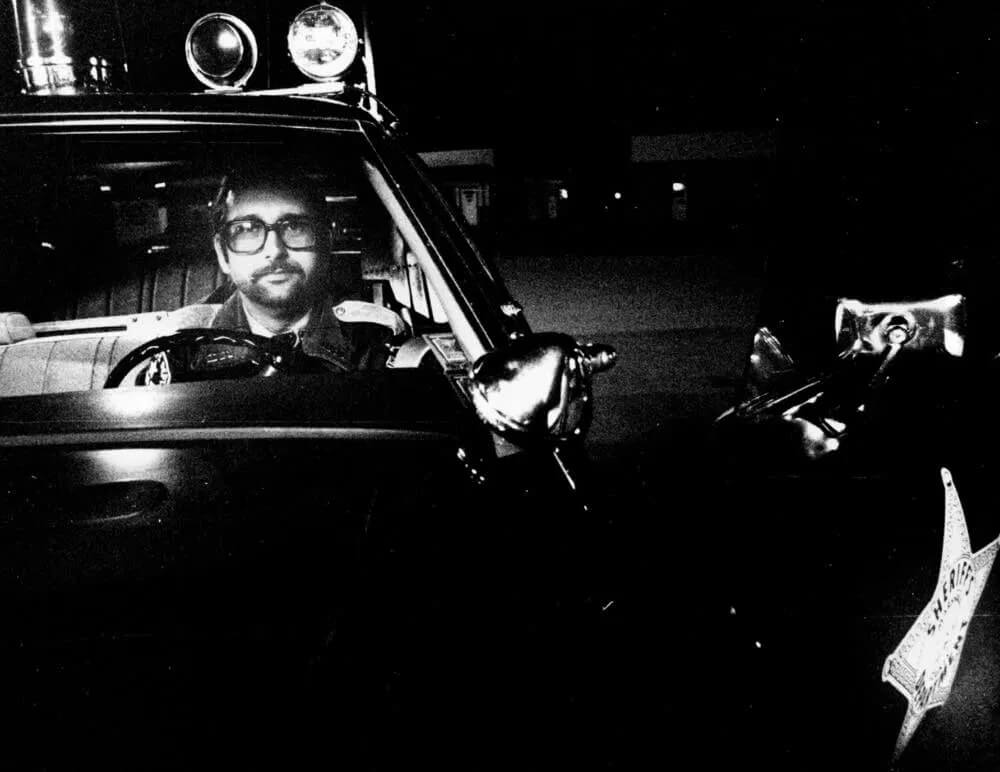 There is no doubt that in the previous century, the world was astonished by the strange aerial phenomena, flying saucers, Foo fighters, and UFOs. In 2015, Metrocosm compiled 90,000 UFO sightings that had happened in the United States since 1905 and drew an impressively detailed, interactive map (as shown below). Not all sightings gained media attention but the Val Johnson incident left a strong mark in the history of UFO encounters. Marshall County Sheriff’s Deputy Val Johnson chased a strange ball of light that ended with injuries and damage to his car.

At around 1:40 a.m. on August 27, 1979, 35-year old Sheriff’s Deputy Val Johnson was in his Ford LTD cruiser, patrolling on a State Highway in northwest Minnesota. Suddenly, he noticed something strange that could be explained, according to Jonhson.

He saw a ball of light, hovering a few feet above the ground that was visible miles from his car. He decided to investigate the matter so drove towards it. At first, he thought it was an aircraft with big lights from the nearby Air Force base in Grand Forks, North Dakota that landed on the road. As the road was flat, he could see it but decided to approach it to check what it was.

“I noticed a very bright, brilliant light, 8 to 12 inches in diameter, 3 to 4 feet off the ground. The edges were very defined. I thought maybe a semi hit a deer, Or maybe an aircraft with one of those big lights had landed there,” Jonhson said. In some time, the bright light entered his car. It was so bright that he felt like hit by a heavy pillow on his face. According to official reports, it was the last thing he remembered as he lost his consciousness for 39 minutes.

After regained his consciousness, he found his car in the ditch, positioned sideway in the northbound lane of the road. His engine was off, but the headlights were still on. He tried contacting his fellow officers on the radio and said that something had hit his car. One of the officers speculated that a small car had hit him. But Johnson said it was not a vehicle. Besides, his car windshield was broken, some lights were also damaged and also both antennas were bent to 90 degrees. What’s more, he had some bruises and felt a burning sensation on his face, especially around his eyes. The most shocking part of the story was that his wristwatch and the clock of his car were 14 minutes slower.

One of the officers who was off-duty arrived at the scene and found Johnson leaning against the steering wheel. As the burning sensation on his face was very intense, he was immediately taken to the hospital where doctors eased his pain. Later, between 3 and 4 a.m., his statement was recorded.

Johnson had no idea what had hit his car, but the mark left by that thing became huge evidence for the researchers. His car was investigated by “a metallurgical engineer from Honeywell, a glass expert from the Ford Motor Co., a consultant in hyperspectral imagery from a Brainerd laboratory.” Besides, UFO researcher Allen Hendry from the Center for UFO Studies visited him.

From an encounter with the ball of light to injuries, a damaged car, and 14 lost minutes, his case was full of mysteries. Hendry could not find any specific explanation for his case. The pattern made by a crack in the windshield glass was “extremely unusual” according to Ford glass expert.

“I saw a ball of light,” Johnson said. “I drove toward it, and suddenly it was in the car with me. It’s unexplainable, and will remain so. I’m happy with my mental stability.”

According to experts, a best-fit explanation for the damage on his car was “a highly charged electrical ‘thing’ with enough mass and momentum to create the effects.” However, the case was never solved and the documents also vanished in years. Johnson’s patrol car is still preserved and displayed in the Marshall County Museum with copies of the documents about his case.