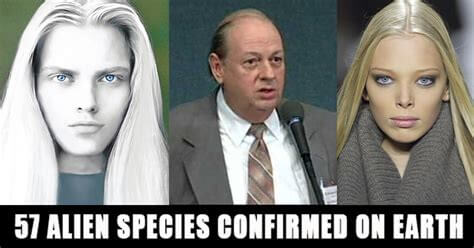 We go about our daily lives perceiving the sphere that we call earth as being an entirely self-contained universe. We feel safe on solid ground and sheltered by the sky. The truth is that we are hurtling through space, orbiting the sun at more than seventy thousand miles per hour. We have a false sense of how we see the universe and life itself. Given some thought on the subject you will find that all life on earth is of alien origin. Science now holds that the first traces or building blocks for life were brought to early earth via meteorites and asteroids at a chaotic time when bombardment from space was still very frequent. In theory we are all aliens. We are on the verge of something new, a mind-shift towards the future. Technologically we are at a point where almost anything is possible. With people like Sergeant Stone of the Disclosure Project http://www.disclosureproject.org/ claiming that the US Government is in possession of advanced alien energy and propulsion systems technology that is capable of traveling faster than the speed of light, and that we are able to manufacture these systems here on Earth. If we now have the capacity for inter-stellar travel, is it not obvious that some much older and way more advanced civilizations than our own must exist on some distant planet in some far away galaxy… According to Sergeant Stone 57 alien species have now been catalogued. It is said that most of these “aliens” are humanoid in appearance; scientists have no answers to explain this phenomena. It is widely accepted that life would adapt and be a product of its environment and take form accordingly. Cloning comes to mind, especially if one was to take all recorded cases of abduction and experimentation on human subjects serious. Myths around the world speak of gods of the First Time. Think of the Egyptians and Osiris or the Incas and Viracocha who was said to be a master of science and magic wielding powerful weapons. Could these gods of mythical times have been space travelers from distant worlds? Other myths of vampires, werewolves, elves and dwarfs come to mind, do these tales hold any alien truth. Pyramids found in Egypt, China, Central and South America. There is an unseen hand at work, some unidentified civilization, race or species. We are not alone; the time for revelation is very near. Our world is ready for change, ready to – and – in the process of moving in the direction of a higher level of consciousness. There is not much that surprises people anymore these days. DNA is no more a mystery and cloning is yesterday’s news. Not long ago people met their end for saying that the earth was round. Maybe in a few years we will look back at the time when man thought that he was alone in his domain and smile. The shift towards the future is here…