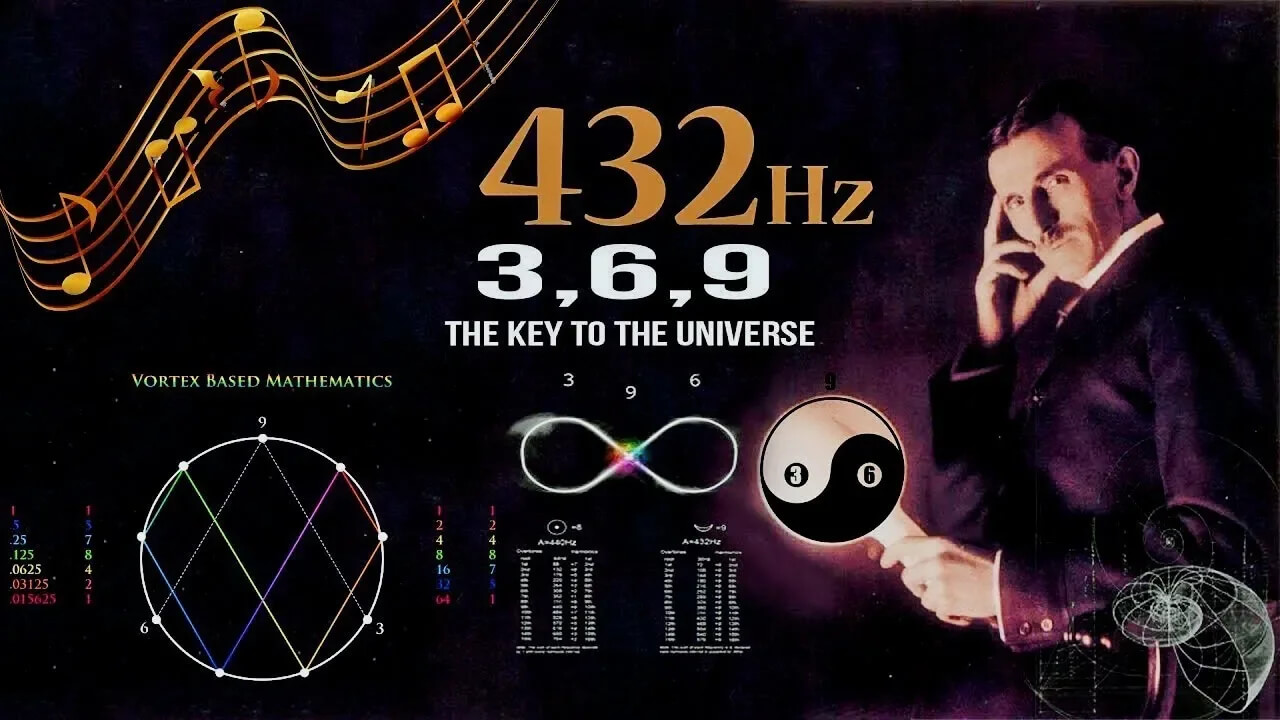 Michael Lee Hill
Get More Cool Videos – Subscribe ➜ https://goo.gl/Tohnkg Ancient Anunnaki Technology ➜ http://www.michaelleehill.net Why 432 Hz? In 1936 the American Standards Association recommended that the A above middle C be tuned to 440 Hz. This standard was taken up as the International Concert pitch. Hmmmm….. I wonder why? Believe me, they knew exactly what they were doing. “If one should desire to know whether a kingdom is well governed, if its morals are good or bad, the quality of its music will furnish the answer.” – Confucius Now how do we tell the world we need to re-set the International Concert pitch to A=432 HZ? A=432 Hz, known as Verdi’s ‘A’ is an alternative tuning that is mathematically consistent with the universe. Music based on 432 Hz transmits beneficial healing energy, because it is a pure tone of math fundamental to nature. There is a theory that the change from 432 Hz to 440 Hz was dictated by Nazi propaganda minister, Joseph Goebbels. He used it to make people think and feel a certain manner, and to make them a prisoner of a certain consciousness. Then around 1940 the United States introduced 440 Hz worldwide, and finally in 1953 it became the ISO 16-standard. What is 440 Hz? 440 Hz is the unnatural standard tuning frequency, removed from the symmetry of sacred vibrations and overtones that has declared war on the subconscious mind of Western Man. In a paper entitled ‘Musical Cult Control’, Dr. Leonard Horowitz writes: “The music industry features this imposed frequency that is ‘herding’ populations into greater aggression, psycho social agitation, and emotional distress predisposing people to physical illness.” You just have to go out in the street and take a look around. What do you see? School kids, young adults on their way to work, a woman pushing her baby in a stroller, a man walking his dog and what do they all have in common? iPods or MP3 Players! Ingenious, isn’t it? “If you want to find the secrets of the universe, think in terms of energy, frequency and vibration.” – Nikola Tesla TPTB, are successfully lowering the vibrations of not only the young generation but the rest of us as well. These destructive frequencies entrain the thoughts towards disruption, disharmony and disunity. Additionally, they also stimulate the controlling organ of the body, the brain, into disharmonious resonance, which ultimately creates disease and war. This is the biggest mystery. For over 25,000 years the Universal Truth was not available to the people of this planetary system. It is now finally being received on this planet. Deep seekers of the truth that are open minded and ready will receive it. Throughout history, numerous clues and hints regarding geometry and frequency have been staring at us, calling to us, and waiting for us to put them into place like pieces of a giant puzzle. Here at the dawn of a new age, this sonic-geometric puzzle is finally nearing completion, revealing the building blocks of a language based on energy, frequency and form. How will we use it? With whom will we be communicating? Now that we know the basics of this new language, maybe we are ready to begin the conversation…. again? The answer could be frequency harmonics. We measure sound frequencies in vibration cycles per second, and the numbers listed above – when played as frequencies – just happen to mirror the exact harmonic patterns found in nature. The thing is, the timekeeping unit known as the “second” did not exist until quite recently in our history, so how could our ancestors have known about these harmonies? Here’s where the mystery really gets deep. You see, the 60-based mathematical system that led to the creation of the second is not only thousands of years old, it was supposedly “gifted” to humanity from “Heavenly Visitors Who Came From the Skies”……….the Anunnaki! Here is what the famous Nassim Haramein (director of research for The Resonance Project) had to say regarding my Cymascope cymatic image of my guitars A =432 Hertz image. “Universal tuning to 432 Hz makes sense because it creates such incredible resonance naturally in the structure of space as evidenced by this image of a 432Hz frequency being played into a fluid medium and imaged, a process known as Cymatics. The story of how we all ended up tuning the note A to 440Hz is a long one with many different factors coming into play, the point is to move forward with our new knowledge of physics, frequency, vibration and the universe in general and work toward increasing coherency and resonance by tuning our minds and literally our instruments in music to naturally occurring highly resonant frequencies..” – Nassim Haramein
Please remember we all have different opinions, Think Before You Speak or Write Something that is cruel to Others. After all, We are only Humans. Wishing you clear skies and wide eyes. To share your experiences or just leave a comment there is a area below. Read or listen.