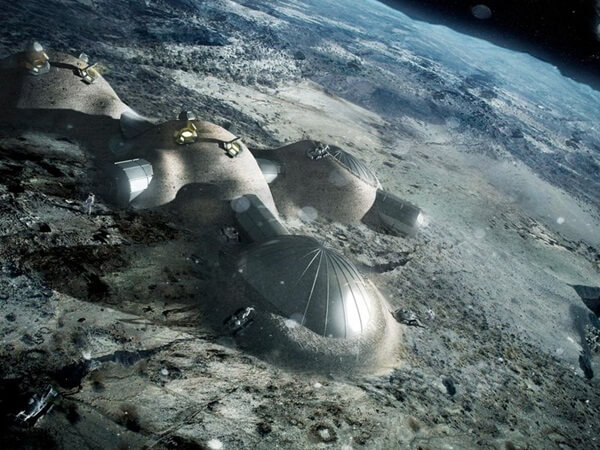 Could astronauts one day be printing rather than building a base on the Moon? In 2013 ESA, working with industrial partners, proved that 3D printing using lunar material was feasible in principle. Since then, work continues to investigate the technique. The shielding against radiation provided by a 3D-printed block of simulated lunar regolith was measured, providing important inputs for next-stage designs… Soon the Agency is due to investigate another lunar 3D printing method, harnessing concentrated sunlight to melt regolith rather than using a binding liquid. But how might lunar 3D printing one day be used in practice? Foster+Partners, contributing architectural concepts for the original study, put together this outline of a hypothetical mission to 3D-print an entire a lunar base, illustrating the design factors that steered them in their work. The rim of Shackleton Crater at the lunar south pole was chosen for the base location. The Moon’s rotation is such that the Sun only grazes its poles at low angles. The result is a near-constant ‘peak of eternal light’ along the rim of Shackleton Crater, beside regions of permanent shadow. Building in the vicinity of such a site would offer plentiful solar power, and relief from the extremes of heat and cold found across the rest of the Moon. In reality any lunar base remains firmly on the drawing board, but each small step forward in research makes future lunar colonization a little more feasible. In October 2014 more than 350 experts came together for a two-day Additive Manufacturing for Space Applications workshop at ESAs ESTEC technical center in Noordwijk, the Netherlands. They discussed the potential of 3D printing – also known as Additive Manufacturing – to transform the way the space industry operates and begin preparing common standards for its use. A mockup of ESAs aspirations for its future Moon Village.

We’ve all fantasized of visiting somewhere exotic. For most of us, that dream spot is somewhere on Earth. But for some, the ultimate must-see destination isn’t on our planet at all.

NASA is currently planning a series of 37 rocket launches, both robotic and crewed, that will culminate with the 2028 deployment of the first components for a long-term lunar base, according to recently leaked documents obtained by Ars Technica. An outpost on the Moon is surely an exciting prospect for both science geeks and prospective solar-system sightseers, but some believe NASA’s timeline is a too ambitious to be realistic.

However, unlike NASA, who not long ago adjusted their sights from Mars mission to a return to the Moon, the European Space Agency (ESA) has already spent almost five years quietly planning a permanent lunar settlement. And while building it may take a few decades, if done right, it could serve the entire world — sightseers included — for many more decades to come. This cutaway shows the interior of a 3D printed section of ESAs planned Moon Village.

It takes a village

The project, dubbed Moon Village, first made headlines back in 2015, when the newly appointed Director General of the ESA, Johann-Dietrich Woerner, told the BBC about his vision. “A Moon Village shouldn’t just mean some houses, a church, and a town hall,” he said at the time. “This Moon Village should mean partners from all over the world contributing to this community with robotic and astronaut missions and support communication satellites.”

Though Woerner’s comments gave the Moon Village concept its initial momentum, since then, much of the cooperation and planning for the lunar outpost has been spearheaded by the Moon Village Association (MVA), a non-governmental organization with about 150 members spread across nearly three dozen countries. Working closely with the ESA, the purpose of MVA is to foster collaboration between nations and organizations spread all over the world — especially in developing countries — to help bring visions of a permanent lunar base to fruition.

Moon Village is not just going to be another International Space Station on the Moon, said Senior Space Policy Adviser and President of the Moon Village Association, Giuseppe Reibaldi, in a presentation. Instead, Moon Village aims to be a collaboratively designed and expandable permanent lunar settlement that can serve as: an innovative research hub for industry and academia alike; an otherworldly destination for commercial travelers; and a proving ground for future crewed bases on Mars and beyond.

“The goal of the organization is to go beyond space, to go beyond the stars,” said Reibaldi, “because this is a step for all humanity, and nobody needs to be left out.” Currently, stakeholders plan to build Moon Village near the lunar south pole. In particular, they want to target somewhere close to the rim of Shackleton Crater, which boasts areas that are almost perpetually bathed in sunlight — ideal because it provides an ample source of energy via the tried-and-true technology of solar panels.

In addition to copious amounts of available sunlight, at about 2.5 miles (4 kilometers) deep, the floor of Shackleton Crater is constantly cloaked in shadow. This means it’s the perfect place to hide valuable, sunlight-sensitive volatile resources like water-ice. Such a find nearby could provide residents of Moon Village with drinking water, breathable air, and a potential source of rocket fuel, as long as we have the means to unlock it.

Designing a Moon base

According to the plan, Moon Village will be built in incremental steps. First, individual landers will descend to the lunar surface near Shackleton Crater, at which point they’ll each deploy inflatable modules. These modules, which are expected to be up to four-stories tall, would eventually serve as workspaces, residential areas, scientific labs, industrial sites, and environmental habitats.

The inflatable modules, however, cannot effectively shield humans from harmful radiation, temperature swings, or micrometeorite strikes. So, the ESA and MVA are currently working with private industries to design robots that can 3D print a protective shell around each structure using readily available regolith taken from the lunar surface.

Researchers estimate it should take a pair of such robots about three Earth months to construct a solid dome around an inflatable module. And as more of these habitats are built, they will be networked together through a series of pressurized walkways connected to airlocks at each module.

Europe, NASA, and even China are all currently working toward the goal of establishing a long-term presence on the Moon. But the reality is that no matter who gets credit for building the first reliable lunar settlement, it will likely one day morph into a massive international collaboration unlike anything humans have ever seen.

With the ESA and MVA spending time thoughtfully considering the best approaches for building an expandable, adaptable, and most of all permanent lunar base, Moon Village is definitely worth keeping an eye on.

lease remember we all have different opinions, Think Before You Speak or Write Something that is cruel to Others. After all, We are only Humans. Wishing you clear skies and wide eyes. To share your experiences or just leave a comment there is a area below. Read or listen.