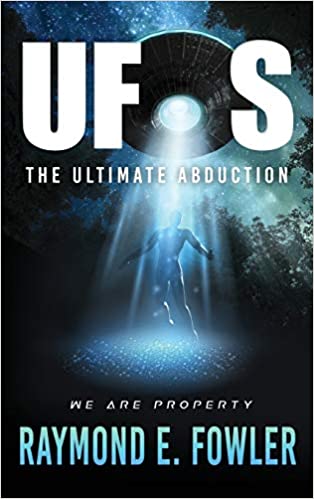 Available right now is the new book from Raymond Fowler, a well-respected and long-time Ufologist. The title of Ray’s new book: UFOs: The Ultimate Abduction. I haven’t read the book yet, but I will soon – and I’ll definitely be reviewing it right here at Mysterious Universe. In the meantime, however, at Amazon there is some fascinating information on the book that is provided by Ray himself. It begins as follows: “This book addresses and answers a rampant question within UFOlogy, whether UFOS are physical or psychic in nature. In my early days as a UFO investigator I would throw UFO reports that contained paranormal phenomena in the proverbial wastebasket. My position, etched in the halls of Congress, was that UFOS were machine-like physical craft from another star system. However, as time went by, I watched in dismay as several respected UFO researchers moved from a physical to a psychic interpretation of the UFO phenomenon. Little did I know then that my own view would also slowly but surely be honed to accommodate ever deeper levels of the psychic components triggered by the UFO experience.”

The information continues: “Stringed to together by amazing synchronicities, I became obsessed, one after the other with UFO Abductions, Out-of-the-body experiences, Near Death Experiences, After Death Communications, Quantum Physics, and the Time Slip Phenomenon. Studies of these phenomena led me to the startling conclusion that they, and UFOS, are interconnected and all part of one encompassing metaphenomenon. I concluded that UFOS originate from the dimension NDErs describe and that we are transitory citizens of that world of Light who shuffle back and forth between a particle dimension and a wave (light) dimension through reincarnation.”

And, finally, we have this from Ray: “The UFO abductions reflect UFO entities monitoring and caring for the human particle form in preparation for their metamorphosizing by OBES into a new body of light in the afterlife dimension. The robed human-appearing entities that greed NDErs at the world of light appear to be controlling this process and to be genetically related to humans. PLES on the other hand reflect physical humans returning and repeating this process by reincarnation as part of a natural constant inter-balanced exchange between matter and energy – between particle and wave. Inconceivable as this might be to the reader, the final analysis reached by the author is that UFOS represent a final abduction for one’s current life and that we are property!”

Although Ray uses the word “property,” it’s important to note it’s not meant in a negative or a frightening fashion. It should be noted, however, that not everyone is of that opinion. Some are absolutely terrified. It’s a fact that over the years there has been a growing interest in the issue of the “Grey” aliens of Ufology and their alleged connections to the afterlife. Indeed, this subject turned up extensively in my 2010 book, Final Events, albeit from a perspective very different to that of Ray. My book is a study of the research and investigations of a small think-tank-type group that nicknamed themselves the “Collins Elite.” It’s the belief of the group that far from being extraterrestrial in origin, our purported alien visitors are, in reality, deceptive demons and fallen-angels; the minions of Satan, who are paving the way for Armageddon, Judgment Day, and the reaping and enslavement of our very souls. It’s important to note that I do not personally adhere to any of the beliefs of the Collins Elite, as I have consistently noted in just about every interview I did for the book. I wrote the book because I found it fascinating that there was (and still is) a group in the U.S. government that fully believes the UFO issue is demonic.

The group’s opinion is that aliens have never visited us. Rather, they termed them our visitors as “Non-Human Entities.” It was a term that, for the group, equated with “demon.” That’s right: the Collins Elite believes the UFO phenomenon has demonic origins. Not only that, they suspect the NDEs “ingest” the human soul when we die. In other words, and from the C.E. perspective, the soul is a form of “food” for the NDEs. A grim situation, to be sure. And, it’s a scenario not too dissimilar to that in the Matrix movies. In the movies, it’s our electricity the machines want. For the NHEs, it’s the soul. Of course, it should be remembered these are simply the beliefs of the Collins Elite. Even the members of the group admitted their theory was just that: a theory. One final thing: even the controversial Bob Lazar talked about this, and long before the Collins Elite were being discussed.

It’s a fact that most people who have studied the claims of Bob Lazar focus their attentions on what he had to say about UFOs allegedly secretly held deep in the Nevada desert. There is one issue which doesn’t get the attention that it really should. It’s a part of Lazar’s story that takes things down a path that is filled with disturbing revelations involving the afterlife. One of the many briefing papers that Lazar said he read at Area 51’s S-4 facility stated that the aliens refer to us, the human race, as what we would call “Containers.” But, containers of what? Well, that’s where things get really controversial. Back in the late 1980s, Lazar told KLAS-TV’s George Knapp that based on what he, Lazar, read in those papers “…religion was created so we have some rules and regulations for the sole purpose of not damaging the containers.”

There followed an awkward conversation which saw Knapp pressing for answers, and Lazar almost squirming because of the nightmarish nature of the story. That’s hardly surprising, because the claimed big secret is that the aliens have an interest in the human soul. Worse, though, they allegedly use the soul in a way that the U.S. Government doesn’t fully understand. Or, that the government does know, but doesn’t know how to tell the world the awful truth. George Knapp was not the only person who Bob Lazar spoke to on this issue of containers. Michael Lindemann is the author of a 1995 book, UFOs and the Alien Presence: Six Viewpoints. He also questioned Lazar on this controversy-dominated aspect of the story of Lazar and Area 51. Lazar added a bit more to the story, when speaking with Lindemann, as the latter acknowledged in his book. He noted that Lazar said the containers were “extremely, extremely unique,” that they were “very difficult to find,” and that the biggest UFO-themed secret of all revolved around our souls.

With that all said, I look forward to reading and reviewing Ray Fowler’s new book very soon.