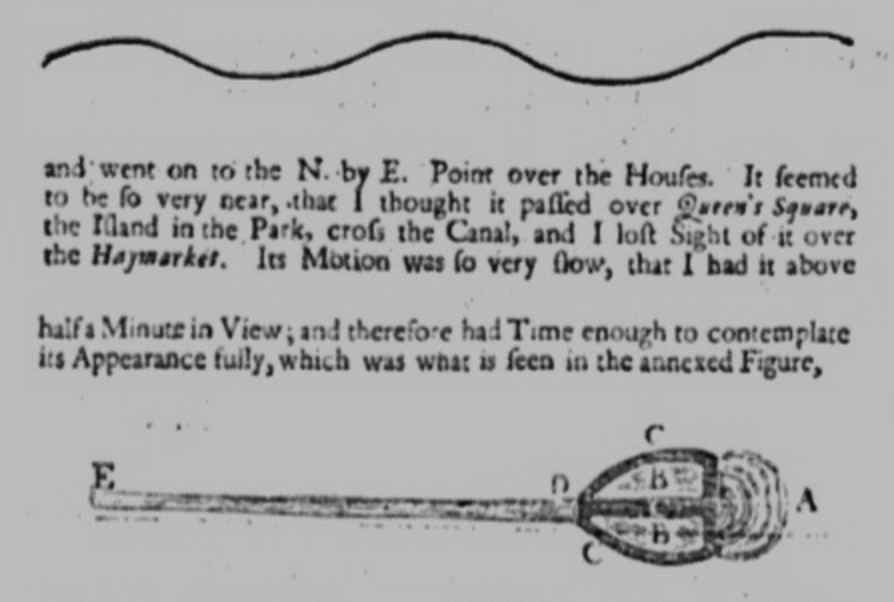 There are many cases where strange aerial occurrences from the past, which researchers have looked at as possible precursors or corollaries to the modern UFO phenomenon.

In most cases, these objects or aerial occurrences can be identified as natural atmospheric phenomena of various kinds. Among such examples are the “apparitions” and other aerial phenomena that were chronicled by Hans Glaser in the middle 1550s, which depicted everything from “blood rains”, a phenomenon known today to be caused by sand or other particulates carried aloft into the air, and subsequently brought back to earth with precipitation, to parhelion and sun-dogs.

These modern precursors to the “Forteana” that would begin to appear in the early 20th century are often entertaining, and a few incidents from the pre-modern era also remain of intrigue for the phenomena described. Perhaps one of the most notable sightings of an odd aerial wonder prior to the 19th century had been a strange ball of light observed by Cromwell Mortimer MD, Secretary of the Royal Society of London, in 1742.

Mortimer gives us the following account of this object, which was subsequently published in Philosophical Transactions, vol.XLIII, 1746, pp.522-525:

“As I was returning home from the Royal Society to Westminster, on Thursday, December 16, 1742, at [20:40], being about the middle of the parade in St James’s Park, I saw a light arise from behind the trees and houses in the south by west point, which I took at first for a large skyrocket; but when it had risen to the height of about 20º, it took a motion nearly parallel to the horizon, but waved in this manner, and went on to the N by E point over the houses.”

As Mortimer watched the object, he believed its path had brought it directly over the Bloomsbury district of London, passing over Queen’s Square and making its way in the direction of the canal adjacent to it. Mortimer notes that he “lost sight of it over the Haymarket.”

Queen Square, as it appeared in the 1780s (public domain).

As to how the object moved, he gives us a very detailed description. “Its motion was so very slow,” Mortimer explained, “that I had it above half a minute in view; and had time enough to contemplate its appearance fully.”

At a mere 30 seconds, this isn’t “prolonged” by any stretch of the imagination, although it certainly is lengthier than most fleeting observations of meteors and similar objects. Nonetheless, this was enough time that Mortimer’s observation could be commemorated in a diagram which gives us an idea of both its appearance and behavior:

Based on this diagram, Mortimer explains the mechanics of the object as follows:

A: seemed to be a light flame, turning backwards from the resistance the air made to it.

BB: a bright fire like burning charcoal, enclosed as it were in an open case of which the frame CCC was quite opaque: like bands of iron.

At D issued forth a train, or tail of light flame, more bright at D, and growing gradually fainter at E, so as to be transparent more than half its length.

“The head,” he concluded, “seemed about ½º in diameter; the tail near 3º in length, and about one-eighth of a degree in thickness.”

Many have speculated over the ensuing centuries as to what the object might have been. Although ball lightning has been proposed, it is unusual for this phenomenon to last more than a few seconds (although there are notable exceptions to this, as apparent from various earth-light reports involving geophysical illuminations seen at various localities around the world). Another candidate might be a meteor, although the object in question, remaining in the sky for half a minute, would have to be an exceptionally long duration meteor if this were the case.

After more than two centuries, it would be difficult to estimate with any certainty what, precisely, Mortimer had seen on his return from the Royal Society that evening in 1742. However, what cannot be disputed is that this is arguably the most detailed report of anomalous aerial phenomenon from this period in history, and observed by a man of science, no less. In fact, in many ways the quality of Mortimer’s observation is better than most modern UFO reports!

Update: Special thanks to Theo Paijmans for providing a correction for this article; Mortimer’s observation was published in Philosophical Transactions in 1746, not in 1743.