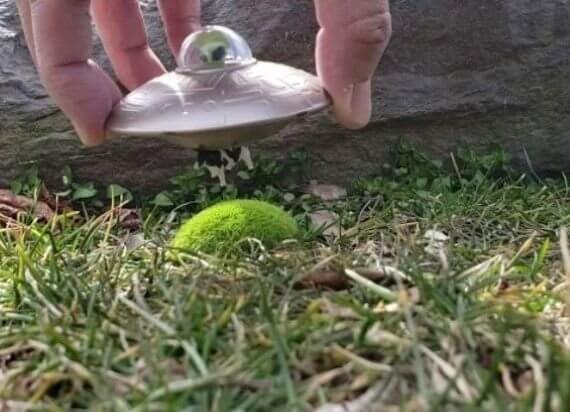 There have been UFO and alien encounters of all types over the years, from beings and craft of all shapes and sizes, but every once in a while there will be a spate of encounters and sightings that truly stick out as something truly odd. Whether it is because of some bizarre details or behavior, these cases certainly manage to lodge themselves firmly into the weirdest of the weird. One such series of events apparently happened in the country of Malaysia in the 1970s and 80s, and involves an intense wave of grumpy, action figure sized aliens and their tiny, toy-like spaceships.

What seems to have been an invasion of sorts carried out by aliens of very diminutive proportions began in the summer of 1970, in the city of Johor Bahru, in the country of Malaysia. On this day four young schoolboys were out in the playground when they spied a silver, disc-like object around the size of a dinner plate land and disgorge a group of five tiny humanoid beings, which each stood only around 5 inches in height and were dressed in some sort of reddish, one-piece outfits. As the kids looked on in astonishment, the miniscule little men reportedly crawled down a hole and the miniature craft they had ridden in just sort of vanished into thin air. When the boys went to investigate, they say they found a small burnt patch of grass, but nothing more. The schoolkids excitedly told their headmaster about the strange encounter, and soon more reports would emerge of similar creatures in the area.

On August 19, 1970, a miniature UFO was seen by schoolkids to land just outside of the playground of the Stowell Primary School in Bukit Mertajam, Pulau Pinang, Malaysia, after which a door opened and a gangplank of sorts extended out of it. There was then seen a procession of little 3-inch tall humanoids with little antennae protruding from their heads and dressed in blue suits, with one of them in bright yellow. These tiny humanoids marched down the plank and mostly ignored the gawking kids as they went about building some sort of antennae like device until one of the boys tried to catch one of them. At that instance, the one in the yellow suit, possibly their leader, reportedly drew out a weapon of some kind and shot the boy in the hand with a laser beam, after which the kids recoiled away and told their teachers to come see it for themselves. However, the craft was gone when they arrived, with no sign of what had happened. Later that same day, the little UFO was seen again by one of the schoolchildren, and yet again one of the humanoids shot at him, this time causing him to black out. When he was found lying in the bushes the UFO was gone, but there was a mysterious red welt on his hand where he claimed the mini-laser gun had hit him.

After these initial reports, many of the children in the area began to report these small UFOs and their enigmatic occupants, with the craft never more than a few feet in diameter and the beings between 3 to 6 inches tall. There were also several other attempts to catch the entities, but they always either managed to escape or shot their attackers with their weapons, sometimes leaving cuts or burn marks upon the skin, including a cut incurred by the son of the local police chief. Reports like this went on throughout the summer of 1970, after which the miniature aliens seemed to have gone away. However, this wasn’t meant to last.

The year 1973 would see a resurgence in cases of miniaturized UFOs and aliens in Malaysia, largely concentrated around schools. The first of these supposedly happened at a schoolyard in Gambang, near Kuantan, where two school boys managed to catch a 3-inch tall humanoid, and on this occasion a teacher would come over and see the little man for himself before it managed to squirm out of captivity and run off. Not long after this, kids playing football at a playground at Bukit Mertajam saw a silvery craft only 2-feet across land near the field, which was enough for the kids to stop their game and go take a look. This seems to be something the tiny aliens did not appreciate, as they promptly fired on the boys with bright “beams of light” to send them scattering before flying away in their craft. Later that same year another of these little UFOs would be seen at a field in Ipoh, and this time it would be seen by some of the teachers as well as it flew off. There was also a sighting at Miri, Sarawak, in which the witnesses, again schoolboys, saw a 6-inch tall little man in a white space suit trying to cut a fence with some sort of welding instrument. As soon as the alien knew it was being watched it ran off and was lost in the brush. Interestingly there would be many other sightings of these creatures in the white suits, by both locals and some people on vacation as well, as a group of the entities was supposedly seen walking along a resort beach in the area of Miri.

After this the sightings would trail off until mini-UFOs hit the news again in 1976. In an article for Flying Saucer Review, Vol. 26, No. 5, Jan. 1981, UFO researcher Ahmad Jamaludin would report that there had been a spectacular sighting of one of the tiny humanoids at the Royal Malaysian Air Force Base, just outside of the town of Kuantan, Malaysia. The first sighting was made by a 9-year-old witness who saw the creature drinking water from a drain on the base. He said of its appearance, “it had two feelers on the head and held a steel-like rod in its hand. A pistol was hanging from its waist. It was brown in color and looked like a man.” The boy said that he went back later that evening with two of his friends and they all managed to see the same being. They then told their teacher about it, and he would oddly say of it, “There was no sign of the creature in the area, but I saw a Red Indian-like wigwam beautifully weaved out of grass. It was partly crushed.”

After this, things would go quiet again until 1979, when once again sightings of these impish aliens would fire up once more. It would seem that the aliens were getting a bit more aggressive than before, as in one report a boy had his whole arm paralyzed by one of the creature’s ray guns and in another report three boys and two adults claimed to have been blinded by a beam fired from one of the diminutive UFOs at a place called Kulim. Reports would then stop again, and the last official sighting of the miniature alien invaders allegedly happened in 1985, when a group of seven 6-inch tall humanoids was spotted by some schoolkids near a stack of wood at a school in Paka, Terengganu. Showing that these kids had learned nothing from previous reports of the little entities firing weapons, one of the boys reached out towards one of the creatures and was promptly shot by a beam of light that made his hand very itchy.

After this, the invasion of little people in Malaysia seems to have subsided, leaving us with many questions. What were these creatures and where did they come from? Why Malaysia, and why did they always seem to land at schools and appear to mostly children? Why were they so aggressive and why did kids keep trying to catch them? Was this all a big ongoing prank or something more? It is very likely we will never have the true answers to any of these questions, and we are left to wonder.