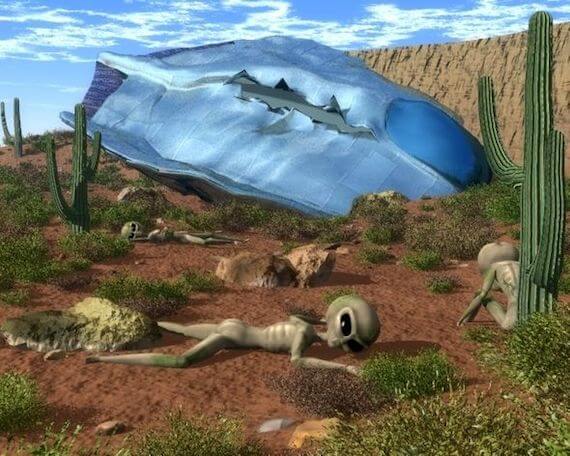 There have been a surprising number of UFO crashes reported over the decades, and these can be pretty spectacular, indeed. Among these some of them take the weirdness up a notch, with Roswell-style scenarios of finding aliens among the wreckage, both alive and dead. There are also numerous reports of alien abductions out there, wherein helpless victims are beamed aboard these otherworldly craft and have a variety of experiences including the infamous examinations as well as sometimes more benevolent ones. This is all strange enough as it is, but what about when it gets even odder? Have you ever wondered if the two have ever come together? Have you ever thought about what if one of these UFOs crashed with an abductee aboard? Well, wonder no more, because there is at least one case where an alleged UFO crashed in the desert complete with aliens and a dazed human woman they had abducted.

It was a calm summer evening in 1971, when California resident Debbie Clayton was relaxing in her home just north of Edwards Air Force Base when she was startled by a deafening roar, followed by a thunderous noise like an explosion that reverberated through the air. Exiting her home, she found neighbors out on the street warily looking about and scanning the sky as a symphony of barking dogs played in the background. Then they saw it, a plume of smoke snaking up into the air from the direction of the base, accompanied by the flickering of what they assumed to be the flames of a fire. Something had happened, an airplane crash perhaps, and Clayton’s curiosity drew her and a few others towards the eerie glow and smoke in the distance. What they would find would be no normal aircraft, and would be an experience they would never forget.

Just outside of the base, an area of scrubland was burned, and in the center of this charred earth was what Clayton described as a mushroom shaped craft of some sort, fashioned of what appeared to be a dull gray metal of some type, which had green flashing lights spaced out upon it. She noticed how smooth the texture of it all was, with no markings, noticeable seams, or doors or windows, seemingly made of one uniform piece of metal, although it did seem to be damaged from its plummet to earth. More bizarre than any of this was that she then noticed some smallish, thin gray humanoids strewn about on the ground, and more puzzling then even this was the sight of a woman who stumbled about in the fog of smoke, dressed in what looked like a tight-fitting pink jumpsuit. The mysterious woman looked dazed and confused as she meandered about the crash zone, but before Clayton could call to her or do anything at all the military from the nearby base were already descending upon the site. Helicopters buzzed over, searchlights pierced the gloom, and soldiers told the gathered, gawking witnesses to disperse or face the consequences.

After forcefully chasing off the civilian witnesses the military reportedly quickly covered the craft with a large canvas tarp and some of the personnel could be seen gathering the three still bodies of those strange entities, but after that the area was closed to further scrutiny. Curious as to what had happened, the baffled Clayton checked the newspaper first thing the following morning, but found no mention at all of the huge boom and the subsequent crash near the base. There was in fact no mention of any incident in the area at all. Turning on the TV also showed no news at all on the incident, and so concerned citizens began calling the base directly to demand answers for what had happened. They all got the same, curt response, that it had been a crashed military vehicle that had gone down due to a technical malfunction and that it was a minor accident. Nothing to see here. Move along. There were no answers about what kind of vehicle it had been, and more importantly no clue given as to what those humanoid bodies were or who that woman in the pink suit had been. Amazingly, it all gets even stranger from here.

The whole thing might have remained hidden, covered-up, and forgotten to fade away into the mists of time forever if it weren’t for the intrepid UFO researcher Albert Rosales. He was able to track down the mysterious woman in pink, who was identified as Lorraine Dvorak Cordini. She admitted that she was the one in the wreckage, but that she had little memory of how she had gotten there or what had happened next, other than that she had been told she had been in an accident and dropped off at her home by military personnel, so Rosales convinced her to undergo hypnotic regression to try and salvage any memories that might be lurking in her subconscious. She agreed, and would have a very bizarre story to tell, indeed.

Under hypnosis, Cordini said that her ordeal had started when she was abducted by strange creatures from her home one evening, apparently being somehow phased right through the wall to be brought into a craft of some sort, which then brought her to an enormous “mother ship,” where she was dressed in the pink jumpsuit. The beings she was with were described as “short, thin, rather translucent” humanoids, and she also was able to remember that these creatures had visited her before when she was a child, and that she felt a sort of non-threatening familiarity with them. Although they seemed mostly androgynous, she would explain that they seemed to have either male or female “essences,” and that the one she took to be their leader was decidedly more human in appearance than the others, looking almost like a normal woman. Cordini also said that although they had mouths they spoke to her telepathically. She could not remember much of her time aboard the mother ship, but when says that she was aboard another, smaller transport craft on her way home when her memory would jump to the crash. She would explain:

I was physically on board a mother spacecraft working. When it was time to return to earth three “ETs” (short, thin, rather translucent in appearance like in Close Encounters of the Third Kind), one female essence and two of male essence were the crew. We were either shot down or crashed near Edwards Air Force Base in California. I remember standing in the wreckage, suddenly in conscious memory, confused, disoriented and filled with sorrow as military personnel kicked the bodies of the two dead ETs. I remember hearing in my mind the captain of the mother ship saying how sorry she was that they could not help us for fear of being detected. The female crewman was standing to my left. I had on a pink body suit. I cried as the military cursed my dead comrades. I don’t yet remember what the parts of the ship looked like.

The next thing she would remember was being approached by the military, handcuffed and stuffed into the back of a black, unmarked limousine. After this they brought her to some sort of sterile military facility where there was another alien with them, apparently not one of the ones she had been with and apparently of a different species, with a seemingly different agenda. This one was described as being about 4 feet tall, with wet brown skin and a bulbous, oversized head. She has said of this surreal and terrifying experience:

At first I think they (military) might have thought I was a local witness who would not leave and so they arrested me. They handcuffed me and threw me in the backseat of a black limousine. I was taken to an empty hanger. I remember it was cold and had a hollow sound to the noise. I was placed on a cold metal table. Two military to my left, one military to my head along with an ET whom I call Mr. Pumpkin Head Man. The military were dressed in fatigue uniforms and the ET had on a blue kind of two-piece jogging suit with a thin red and white stripe going around the chest area and then another set of two thin lines going up and down on the jacket. At the intersection right above where the human heart would be was either a brooch or insignia. My first thoughts were “brooch”.

They drugged me. I was so confused and disoriented. I struggled to lift my arms and to get up, but I couldn’t, my speech was slurred. I tried to scream but could not. I felt drunk. I heard in my mind Pumpkin Head thinking how great he was and how important he was to these military men. The military man next to him was thinking “What an asshole.” They treated me with great disrespect. Eventually two of them grabbed me under the arms and yanked, pulled and tugged me off the table. They dragged me to the opening of the hanger. The light hurt my eyes.

She claims that after this her memories become murky again, and the next thing she remembers is being dumped in San Francisco, California, wandering around in a confused state and not sure how she had gotten there. It is unclear why she should be dropped off here, as she says she didn’t know anyone in the city and it is far from her own home in the Los Angeles area. She finally did manage to find her way home, and for years this was just an odd experience that constantly haunted her, but which she could not explain. Large portions of her memory were missing, and it was only when bits and pieces became coming back to poke through the surface and she found herself facing frequent nightmares that she knew something was wrong with her. After seeing a program on alien abductions by chance she reached out to the Mutual UFO Network (MUFON) in 1995 and that was when she was approached by Rosales.

The story has leaked out over the years and Cordini has written her own accounts of the events that unfolded, but it has still managed to remain a relatively obscure case and even for those who know about it have often looked at it with raised eyebrows. It is at once a spectacular and unique, yet ultimately frustrating account for a variety of reasons. It is intriguing because it is probably one of the only accounts of a UFO crash involving an abductee that was onboard at the time, and what’s more was recovered alive. If the story is true than it is truly unique and rare. There is also the interesting suggestion that there are several different species of aliens visiting Earth that are perhaps at odds with each other and with different motivations. However, it is at the same time just a little bit too good of a story, and there is very little to corroborate it. There are no news reports of anything unusual near Edward’s AFB at the time, no physical evidence at all, and scarce few corroborating witnesses, which more or less in the end leaves us with Cordini’s own account of what happened.

So, what are we looking at here? Was this lady really snatched away from her home by aliens, only to be shot down along with her captors and then whisked away by the military? Was this perhaps some sort of military experiment that planted these memories in her head? Did she really indeed have some sort of accident and her mind conjured this up out of trauma? Or is this all just the delusional ramblings of a woman who has a tenuous grip on reality? It is all a pretty wild and outlandish report no matter what the case may be, and one wonder just what in the world was going on here.