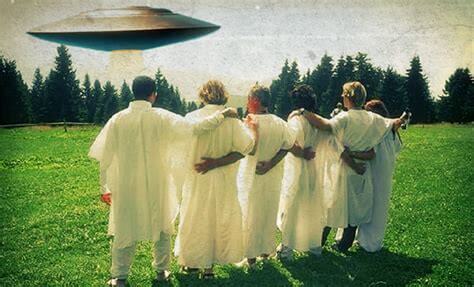 Of all of the strange things the UFO phenomenon has brought to us, one of the weirdest are the groups of people that are drawn to somehow revere and worship them. These groups pop up from time to time, warping UFOs into twisted religious cults, some of which turn out to be quite dangerous. Yet, others are merely odd, and one of the weirder of these was a UFO cult that sprouted up in California in the 1950s, which took its members on a wild mind trip and has quite the strange and creepy history.

The whole thing starts in 1954 in Los Angeles, California, when an Ernest L. Norman and his wife Ruth E. Norman came forward to start a very unique new group. Ernest himself was purportedly a child prodigy and self-proclaimed psychic with supposed telekinetic abilities, that is the power to move objects with his mind, as well as later according to him a scientist and an aeronautical engineer. He apparently met Ruth as he traveled the country as a medium putting war widows in touch with their husbands who had died during World War II. Ruth herself was a bit of a character, claiming to be the reincarnation of Jesus Christ and Mary Magdalene, so it was love at first sight, and the two got along splendidly. Both of them had been devout New Agers at the time they met, and after marrying within weeks of meeting, they set out to publish numerous New age books, some of which were channeled through Ernest via alien intelligence’s, including ‘transmissions’ from Mars and Venus, and before long they were forming their very own cult.

Ernest’s books were very popular among the New Age scene at the time, and as such they attracted many followers, and this evolved into the Unarius Academy of Science, with Unarius being an acronym for “Universal Articulate Inter dimensional Understanding of Science”. The main goal of the group was to promote a new “inter dimensional science of life” based upon “fourth-dimensional” physics principles, and they were heavily into this inter-dimensional aspect of existence. The main idea was that the soul is immortal, and that we are constantly reincarnated over many lifetimes, all of this controlled by interplanetary alien overlords, who would frequently give various channeled messages to followers but mostly through Ernest. Unarius touted itself as a scientific belief system, based on real laws of proven “fourth dimensional science,” and it all involved an elaborate world of a hodgepodge of half baked ideas on atoms, karma, reincarnation, past-life memories, channeling, vibrational energies, cosmic forces, and “spiritual planets.” If one could master these far-out concepts, they were said to be in full control of their life and able to heal themselves of any woe life could throw at them.

There were a lot of fringe and often insane ideas thrown around at the time, such as that Asian races were the progeny of ancient interstellar migrants who began colonizing Mars a million years ago, and it was all pretty wild to say the least. These alien masters, or “space brothers” were from an advanced galactic coalition of planets, and were said to be on track to inevitably arrive on Earth from the stars in 33 spaceships to improve humanity. These spaceships were predicted to land in 2001, after which the entire world would experience a spiritual and technological renaissance and evolution. It all sounds pretty neat, actually, neat enough to attract loads of the disillusioned and outcast. During these years. Earnest would publish several series of books supposedly channeled to him through these alien interdimensional beings, such as the Voice Series of books, which chronicled his astral travels to other planets, and in which he explained that planets such as Mars and Venus had “healing wards” where troubled souls could go to be cleansed. He also wrote his magnum opus The Infinite Concept of Cosmic Creation, which would go on to serve as his main teachings for his followers. He made much of the planet Venus, describing the planet’s inhabitants as beings of pure energy, and more technologically and spiritually advanced, with much to teach us. It was all written with heavy usage of official sounding technical jargon and pseudoscientific mumbo jumbo, so to the uninitiated it would seem to be very authoritative and believable, which only served to gain it more respectability among the gullible.

Ernest would die in 1971, after which his wife, who took on the name of “Uriel” as the alien emissary on Earth, would take over operations and move the headquarters to the San Diego suburb of El Cajon, which was meant to not only be a meeting place for members, but also the final destination of the aliens they expected to arrive. Under Ruth’s guidance, the organization gained a larger public profile, and she became a bit of a minor celebrity, appearing on shows such as Late Night with David Letterman and The David Susskind Show, all while building her own studio for their purposes, which produced over 100 video programs that began airing on public access stations in the 80s. She claimed to be in constant communications with beings in the higher “non-atomic dimensions” or spiritual planes that they collectively called the Unariun Brotherhood, and this all fed into the beliefs of the group, with the idea being that these teachings could answer all questions about the universe and one’s existence.

Ruth Norman would pass away in 1993, but the movement would live on. Unfortunately, the planned alien coming did not come to pass in 2001 as promised, which caused a stir within the organization, but not its downfall. As these cults are wont to do, it was all explained away as humankind not being ready or some such nonsense, anything to avoid being wrong, and their activities continued, with chapters in the United States, Canada, New Zealand, Nigeria, and the United Kingdom right up into the present. In the end the Unarius Academy of Science has gone down as one of the stranger cults to pop up around the UFO phenomenon and aliens, but it will no doubt certainly not be the last.