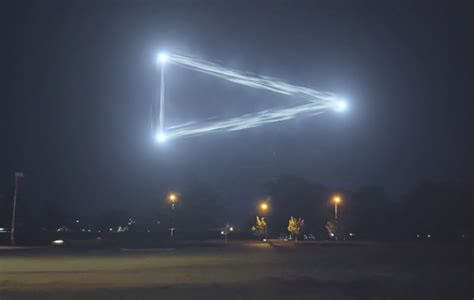 UFO accounts come to us from around the world, from every corner of the globe. They largely serve to incite wonder and discussion, but rarely provide any real answers. The point is that UFO sightings are a global phenomenon, and one place that is not really covered so much in the lore is the country of New Zealand. Yet, here we have plenty of UFO cases just like anywhere else, and one of the strangest flaps of sightings unfolded here back in the 1970s, and it is a case steeped in strange encounters, pilot reports, and talk of ominous government cover ups.

What would go on to become perhaps New Zealand’s most famous UFO event began on December 21, 1978, when the crew of a Safe Air Ltd cargo aircraft was traveling from Woodbourne bound for Christchurch aboard their Armstrong Whitworth AW.660 Argosy aircraft. As they approached the Clarence River area, near the remote Kaikoura mountain ranges at around 2 AM, they began to pick up a series of inexplicable radar signatures that did not fit any aircraft they knew of and which they could not explain. As pilots Vern Powell and Ian Pirie stared at the radar screen trying to figure out just what they were looking at, visual confirmation was made, and it came in the form of a group of mysterious lights that began to flicker and dance around the plane almost as if toying with them. One of the UFOs was described as being very large, with five white flashing lights, while others seemed to be smaller, with one of them being “pear-shaped with a reddish tinge that then turned white.” Some of the crew were sure that some of the smaller objects had dropped off the larger one.

The spooked crew called it in to the air traffic controller radar in Wellington, who confirmed that they had also picked up the strange radar hits, and insisted there were not supposed to be any other aircraft in the area. These lights reportedly trailed the plane for over 60 kilometers, before suddenly blinking out and appearing in another location far away, as if they had teleported. After that, they flew off and vanished for good, leaving the pilots and ground control perplexed as to what had just occurred. The same plane would see the lights again 2 hours later along its route, with the UFOs this time seeming to travel about in huge, inscrutable rectangular patterns. It would turn out that the crew of the Argosy and ground control were not the only ones who had seen something odd in the skies on that night. There would turn out to be dozens of people on the ground calling in to report UFO sightings at the same time, to the point that the jittery Air Force even put an Air Force Skyhawk jet on standby just in case it was needed to engage or move in to investigate any of these aerial phenomena, and all of these sightings would only continue into the coming days.

On December 30, 1978, an Australian television crew was flying in another Argosy when they saw a cluster of four or five lights near the Kaikoura Peninsula, dominated by one especially bright, flashing white light. At this time the objects were tracked by Wellington Air Traffic Controllers, and the crew even used their camera to take color footage of the mysterious objects. The objects seemed to be following the plane, and when they came in for a landing at Christchurch the crew was unsettled to realize that one was still on their tail, only breaking off right as they were about to land. When the plane later took off again, they would encounter an immense orb of light, which proceeded to follow them for nearly a half an hour as they gawked at and filmed it. One journalist aboard, a Quentin Fogarty, would say of the surreal situation:

An Air Force Orion on a reconnaissance flight to Kaikoura on January 2 would also report encountering strange lights in the sky in the region, and this was enough to convince the New Zealand Air Force, as well as the Civil Aviation Authority and the Defence Ministry, that an investigation was needed. And so it was that the Prime Minister of the time, Robert Muldoon, would launch one of the first serious investigations into the UFO phenomenon that New Zealand had ever seen. The results were perhaps for UFO enthusiasts, disappointing. The Air Force seemed hellbent on fitting and stuffing it all of it into conventional explanations, writing it all off as the lights of trains, cars, or even squid boats refracted off of clouds, “freak propagation” of radio and light waves, large aircraft or a meteorological balloon catching the sunlight at high altitude, unburnt meteors, and of course the planet Venus, all helped along by “spurious” radar returns. Wing Commander J B Clements would state:

Almost all the sightings can be explained by natural but unusual phenomena. Defence should issue a PR statement fairly soon in order to tone down much of the wild speculation that has existed over recent weeks. Perhaps the most difficult aspect to explain away is the apparent concern – even apprehension – of the aircrew involved in the sightings. At present they do not seem to be prepared to accept the fact that they might have observed Venus. Thankfully, however neither do they believe that they saw a visitor from outer space.

Alleged photo of the UFO

These explanations have not gone down well with some of those who were actually involved. after all, these were trained pilots who should know what any of those natural phenomena would look like, and one of the witnesses has blown off the official prognosis, saying of the explanations given by the Air Force:

None of them to my knowledge or satisfaction have coordinated the visual sighting with the radar sighting. They’ve said the visual sighting was squid boats, it was Venus, it was Jupiter, it was the harbour lights. You name it, they can come up with all sorts of reasons for what it was. But they haven’t explained why I can see Jupiter, Venus and the harbour lights doing 140 knots on my radar.

It is all very odd, and has never been adequately explained. The New Zealand government has stuck to its guns that this is nothing more than mundane, explainable phenomena, and we are left to wonder. Is all of this just misunderstandings, Venus, and other aerial phenomena that can be explained away? Or is there something else going on here? We might not ever truly know the answers to these questions, and the Kaikoura Lights remain one of the most well-known and strangest UFO cases New Zealand has ever seen.