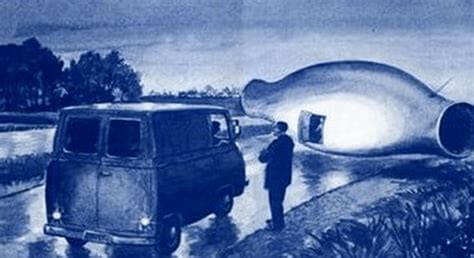 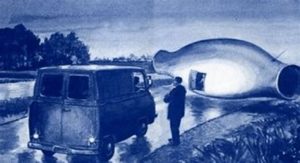 • Redfern attribute the story of Indrid Cold to paranormal investigator Susan Sheppard: Shortly after 6pm (on November 2nd, 1966), Woody Derenberger was driving home from his job at J.C. Penny’s in Marietta, Ohio to his farmhouse in Mineral Wells, West Virginia in a light rain. Suddenly, Derenberger sees charcoal colored UFO without any lights on, following his truck. The craft flew around in front of his car and forced him to pull off of the highway. A hatch opened and an ‘ordinary looking’ man stepped out. As the man walked toward Derenberger’s truck, the “craft” jetted up to about 40 feet in the air where it floated above the highway.

• In his mind, Derenberger heard the words, “Do not be afraid, I mean you no harm, I only want to ask you a few questions.” The man walked up to his passenger side window, and in Derenberger mind he heard, “Now you can speak, or you can think. It makes no difference. I can understand you either way.” Derenberger later explained that this man, Indrid Cold, mostly wanted to look directly at him as they spoke as if Cold could know everything about him. And he felt he would also understand everything about Cold.

• Derenberger describes Cold as 35 years of age, six feet tall and185 pounds with a trim build and a tanned complexion. He had dark eyes and dark hair slicked back. Cold wore a long dark coat and beneath the coat Derenberger could glimpse the fabric of his “uniform” that glistened beneath the coat. Cold kept a frozen smile and curiously hid his hands beneath his armpits most of the time.

• Cold did, however, point at the city lights above the distant hills of Parkersburg and asked Mr. Derenberger, “What do you call that over there?” Derenberger said, “Why, that’s Parkersburg and we call that a city.” Cold responded, “Where I come from we call it a gathering.” Cold later added the curious statement that “I come from a place less powerful than yours.” As the men talked cars passed under the craft which drifted above the road. The occupants were seemingly unaware of the spaceship being there. After all, there were no lights that could be seen.

• Cold then asked about the nearby town of Parkersburg, “Do people live there or do they work there?” Derenberger answered that people both live and work there. Cold said that he was a “searcher” and noted that Derenberger was scared. “Why are you so frightened?” the visitor asked. “Do not be afraid. We mean you no harm. You will see that we eat and bleed the same as you do.” “We only wish you happiness.”

• Finally, Cold said, “Mr. Derenberger, I thank you for talking to me. We will see you again.” With that, the spacecraft came back down, Cold walked back into the hatch, it jetted up into the air about seventy-five feet, made a fluttering noise and then shot away at a very high rate of speed. The entire event lasted about ten minutes.

• Stunned by the incident, Derenberger drove home to his wife. He got home around 7:00pm. Mrs Derenberger said that her husband “could not have been any whiter if he had been lying in a coffin.”

• Derenberger reported the encounter to the West Virginia State Police.  The next day Derenberger agreed to a live television interview about his experience with WTAP-TV the NBC affiliate in Parkersburg. He was grilled by veteran reporter Glenn Wilson for an hour, and by city Police Chief Ed Plum for another hour and a half. Representatives from Wright Patterson Air Force base were in route to interview Derenberger, but whether that came about is not known. Derenberger drew a picture of the spacecraft which he described looking like an “old-fashioned chimney lamp.”

• In the live interview, Derenberger, quoted Indrid Cold as saying to him, “At the proper time, the authorities will be notified about our meeting and this will be confirmed.” Then came the strange visits from men dressed in black. They would arrive his house, ask Derenberger simple questions, and act in a threatening manner.

• Derenberger claimed that Cold visited him many other times at his farmhouse in Mineral Wells. At one point, Derenberger came up missing for almost six months and said he was “with the aliens.” The local population finally became skeptical. Derenberger even claimed to have been impregnated by the aliens. In 1967, Woodrow Derenberger stated to have visited Indrid Cold’s home planet of Lanulos where its residents walked around wearing no clothing. He said the aliens lived in a galaxy called Ganymede where everything was peaceful and there was no war. People began to snicker.

• The ridicule became too much. Derenberger moved his family from the area, to return in the 1980s. He died in 1990 and is buried in Mineral Wells. His family says that they believe something of an otherworldly nature initially happened but Derenberger later added to the tale to sell his self-published book, Visitors from Lanulos, in 1971.