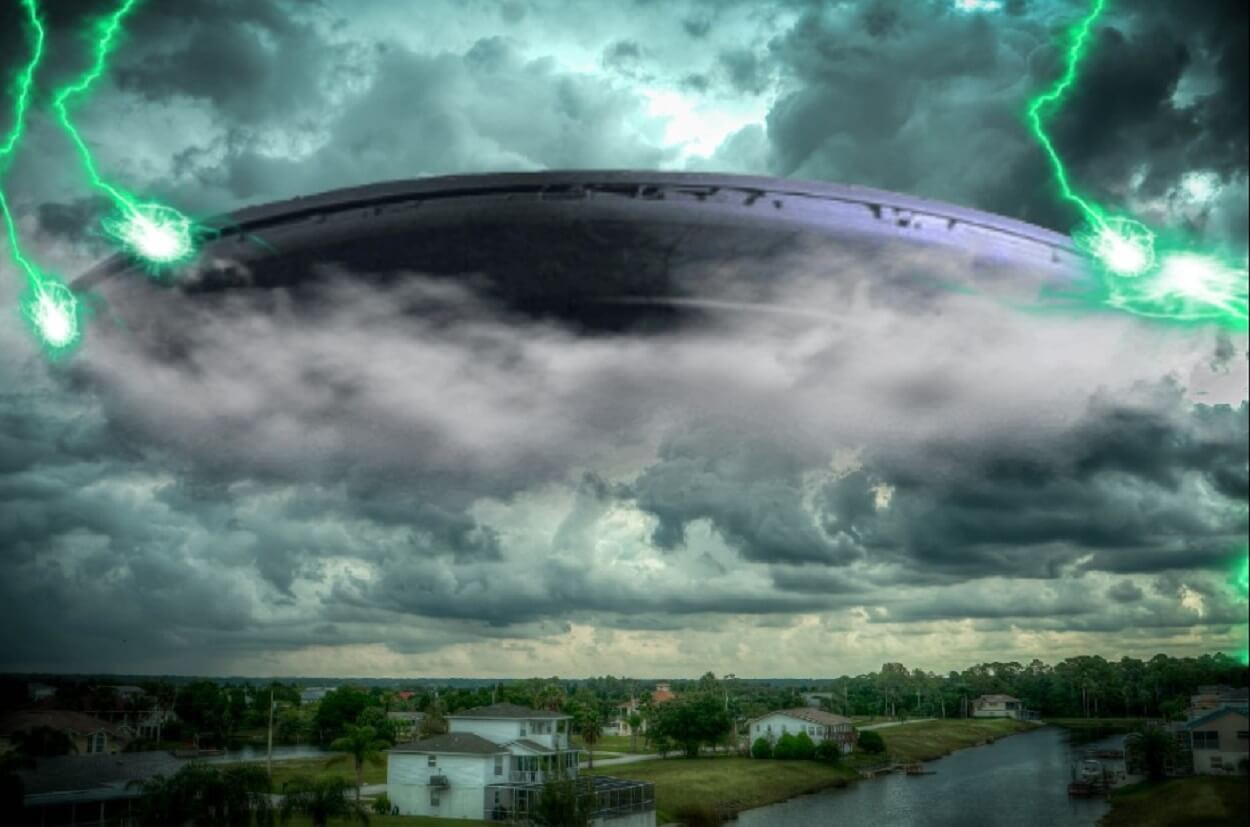 A UFO sighting on the penultimate evening of 1967 in rural Florida was an incident that was over in a matter of seconds. However, the event would, not surprisingly, remain clearly in the mind of the witness. So much so, that decades later he would finally reveal the encounter to the wider world of the UFO community. 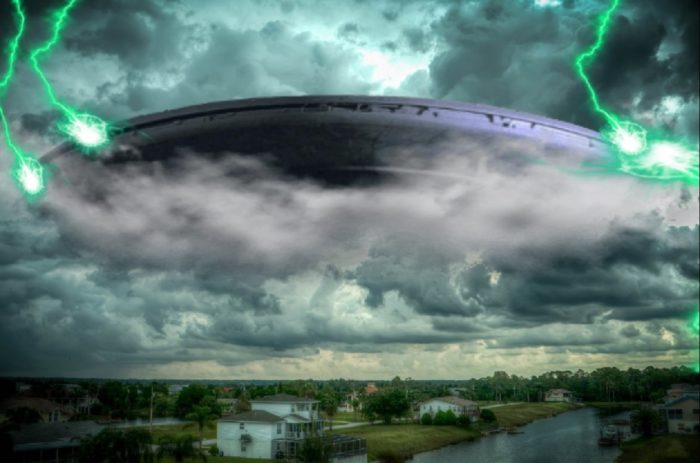 There were many UFO sightings across Florida in 1967

What is also interesting, at approximately the same time, another sighting in Florida also took place with similar details. And would also remain secret for decades before the witnesses would speak of the incident publicly, albeit via an online Internet reporting site.

Both incidents took place immediately following the last of the classic UFO waves at the start of the beginning of the modern UFO era. What might also be relevant, as we will explore a little more shortly, is that cases of alien abduction, while already seemingly well underway in the United States at this point, was about to explode with claims of such ordeals, not only across America, but around the world.

Whether the incidents we are about to explore share a connection or not, and whether they indeed do tie into the alien abduction phenomena that was about to fully unfold around the world is something that remains to be seen.

A Sudden Flash Of Light In The Finals Hours Of 1967

The witness, known in his report as Mr. J.E. Oglesby, was 27 years old at the time of the incident and, along with his family, was staying at his brother-in-law, Jon’s home for the New Year celebrations. They lived in a mobile home in Blitho, a small bordering on barren town just outside of Orlando.

It was on the evening of 30th December 1967, at a little after 7 pm when Oglesby and Jon were sitting in Jon’s kitchen. Each was nursing a hot cup of coffee as they talked. 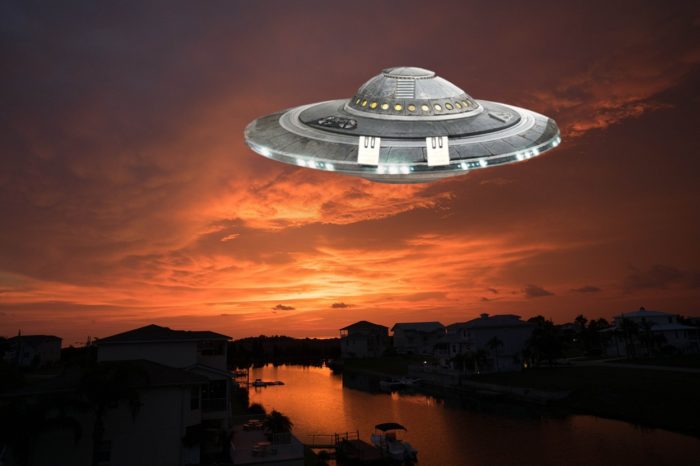 Just what did the witness see that evening in 1967

Then, a sudden “amber flash of light” forced its way into the kitchen from outside. Due to the small confines of the room, Oglesby reached for the front door of the property and pushed it open in order to see what the disturbance was, fully expecting as he did to hear the impact of whatever had fallen to the ground, most likely, he thought, a meteor.

However, no sound came. Nor a rumble of a far-off impact. Instead, in front of him at a distance of approximately 300 feet, and around 100 high, was an “orange orb”. From his perspective, it was approximately the size of a basketball.

All the while, despite this fascinating and bizarre aerial view, not a sound was heard. It was completely silent.

The Sudden “Beam Of Cone-Shaped Light!”

In what was only a “split-second”, the floating orb suddenly vanished. However, Oglesby would recall years later on the Coast To Coast radio show:

…before it disappeared, its brilliant amber color reflected off the bottom of a silent-moving circular-shaped object that measured perhaps 50 to 60 feet in diameter!

Then, the unfolding events took an even stranger turn.

A strange “beam of cone-shaped red light” suddenly emanated from the underside of the object, moving around like a searchlight, ultimately heading to the east. Then, a moment later, another almost identical craft appeared. 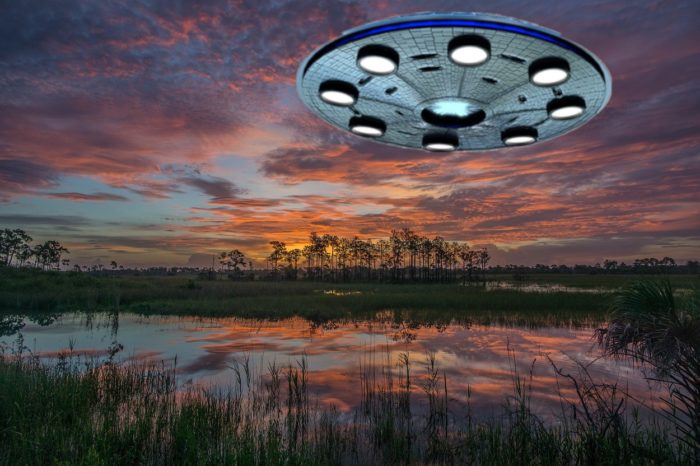 In a bizarre manner given the general perception of a “nuts-and-bolts” craft, the two objects “floated like falling leaves caught on the wind”. They would ultimately disappear behind a “dark tree line in the distance”.

Just as the two men began to take a breath and contemplate the bizarre scenario they had just witnessed, several United States Air Force fighter jets crossed the skies, joined by several dark Apache-style helicopters. There was no mistaking their direction, which was directly to where the two objects had been only moments previously.

Suddenly, the piercing searchlights of the helicopters cut through the night sky, stretching downward to the cloaked terrain below. Several hours would pass by with little other activity.

An “Incredible Display Of Anti-Gravity” And A Discreet Military Presence

At around 1:50 am, however, one of the mysterious objects suddenly ascended from their ground location and into the darkness of the sky once more. Oglesby would further recall:

It continued rising until its structure took on the appearance of a star. It just hung there in the dark starry night!

The two men continued to watch this new aerial activity. However, each was taken by outright surprise when a “thunderous roar” suddenly rang out, breaking the “eerie silence”. The two men looked to locate the source of the sound and saw a “Minuteman-two missile climbing into the night sky”.

The two men watched as the UFO then “performed an incredible display of anti-gravity” which first moved it near to the incoming missile before it dodged it and “zipped away”.

Oglesby would remain where he was, waiting for the second object to take off and vacate the area. However, with the arrival of dawn, the second craft had failed to materialize. 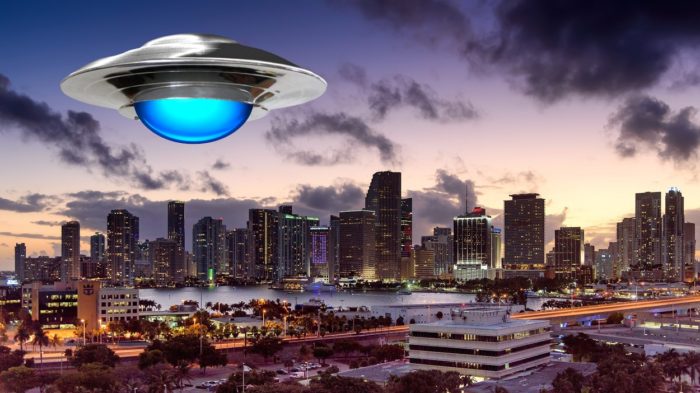 Just what powers these strange crafts

What’s more, he would recall how the entire area would experience a plethora of UFO activity over the next few months. Indeed, we have examined several of the early 1968 UFO incidents from Florida previously.

Before we examine another Florida UFO encounter that took place a year or so after the Blitho encounter, it is also worth mentioning that Oglesby would witness many more UFO encounters over the years, right the way into the early years of the twenty-first century.

This is perhaps interesting in itself. Was he simply well placed, lucky, and fortunate to have so many UFO encounters? Or might such incidents, perhaps unbeknown even to Oglesby himself, be much more than mere sightings? Is it possible the sightings are merely the moments he recalls from abduction encounters? It is an intriguing thought to ponder.

Whether or not there is a connection is open to debate, but approximately two years later in Venice, Florida, at some time in the late-1960s or possibly early in 1970, Gordon Struble – a serving police officer at the time of the incident – was unaware of a UFO sighting by two of his friends. The incident would remain between the two of them until the early 2000s when Struble would bump into one of them and their conversation turned to his work with MUFON. He would ultimately submit the report to the online forum.

On the night in question, the two friends of Struble’s were driving home. Suddenly, however, they noticed a metallic saucer-shaped craft hovering over a nearby house on the roadside. As the two young men slowed the car a little so as to take in the amazing scene, a sudden “bright blue beam” shot out of the underside of the craft and into the house below. 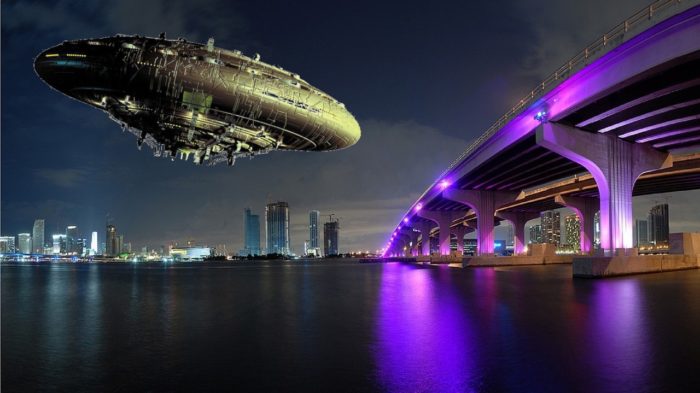 Other similar incidents took place in Florida around the same time

The beam remained visible for around 15 seconds before retracting back into the craft. It then “shot off” back in the direction it came, heading toward the Gulf of Mexico. Within seconds, maybe even a single second, the object was gone.

Each man knew the other had seen the bizarre scene unfold. They would, however, carry on their journey in relative silence for several minutes before finally speaking about it. When he asked why they had not confided in him sooner rather than decades later, they simply replied they feared the ridicule.

As we have asked before, how many other sightings, both from this period in history in and around Florida as well as other eras and locations, go unreported. And consequently, to the larger world, remain unknown.

Questions (As Ever) Lead To More Possibilities (And More Questions)

Like always, if we accept the credibility of the witnesses in the cases we have examined above, then we have to ask what the purpose of these encounters might have been? And more specifically to the cases here, what should we make of the light beams in each case?

Are they some kind of technological search device? Might the encounters witnessed have a connection to abduction cases? Or might, as we have explored before also, these incidents have been ones of some kind of telepathic communication. Perhaps unbeknown even to the recipient?

As with the majority of UFO encounters, the more questions we ask, the more possibilities and subsequent questions are thrown at us. This, however, is very much a part of the process of digging through the various layers that hide the truth of such incidents.

Whatever was taking place in Florida throughout the end of 1967 and 1968, it would be surely amiss to not suspect a connection between these very similar events. And if there is a connection, then we must move on to the purpose behind these encounters. Why were so many UFOs flying around Florida during this period? And how do these sightings and encounters fit into the general and elusive UFO and alien question?