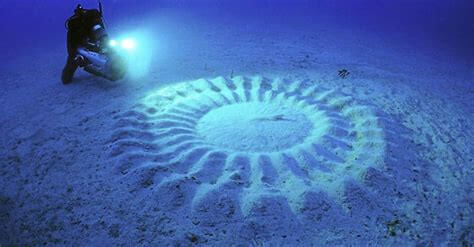 Crop circles have always been found where crops are growing (hence the name) and whatever is creating them seems to be partial to the UK, although there are enough sightings scattered across Europe and occasionally in the U.S. to keep from claiming them as an exclusive British phenomenon. It turns out they may no longer be an exclusive on-land anomaly either – an underwater research crew discovered what appear to be crop circles off the coast of Western Australia. Even more interesting, while many suspect the above-ground crop circles are made by aliens to send messages between each other (although why they wouldn’t just text is baffling) but can provide no proof, these underwater crop circles are definitely made by ‘aliens’.

You know the kind

“It is surprising to find the circles … at a depth where there is not much light.”

Elisabet Forsgren, a behavioral ecologist at the Norwegian Institute for Nature Research, must not be familiar with how normal crop circles appear to be made in the dark of night or she might not be so puzzled by the videos taken by marine ecologist Todd Bond and researchers from the University of Western Australia in Perth at a depth of 100 meters on Australia’s North West Shelf. They were conducting a marine life survey on the North West Shelf (Australia’s largest offshore oil and gas extraction project) when they saw an unusual pattern on the ocean floor … circles in patterns very similar to crop circles.

“We were doing a survey of fish on subsea infrastructure and I knew exactly what they were straight away.”

You can’t fool a marine ecologist like Todd Bond, who knew right away what these circles were … and that they were indeed made by an alien species.

“As far as we know, up until now, there’s only one species of pufferfish that makes these circles and that’s the white-spotted puffer. We recognised the circles from a BBC documentary which had some amazing footage of how these pufferfish make these circles in Japan.”

It pays to watch TV! In interviews with Science News and The Daily Mail announcing the publication of his study in the Journal of Fish Biology, Bond describes remembering seeing similar patters in a BBC documentary about the white‐spotted pufferfish (Torquigener albomaculosus), a species found only in the waters around Japan that uses these seafloor circles to send messages about growing crops. Wait … aliens making circles to send messages? Where have we heard this before?

“’The males take about a week to make these quite elaborate nests and then the female will go from nest to nest. She’ll decide which one she wants to lay her eggs at and she’ll lay her eggs at the centre of the circle.”

Bond suspects these are either a new species or a mutant alien version of the Japanese species because of the depth (the circles are never found below 30 meters in Japan) and the fact that no local pufferfish species are ever seen swimming this deep. However, the underwater camera captured a couple of pufferfish fleeing the area, which is why he suspects they are something never seen before.

Most people only know of the pufferfish in sushi terms – Fugu is the poisonous pufferfish that brave souls attempt to eat without dying. Have these Australian white‐spotted pufferfish fled Japanese sushi chefs and evolved to live at greater depths to avoid Australian sushi lovers? Strange things have happened and it makes more sense that ETs leaving messages for each other on cornfields. For now, marine biologists are content with searching for more of the underwater circles and identifying the species making them.