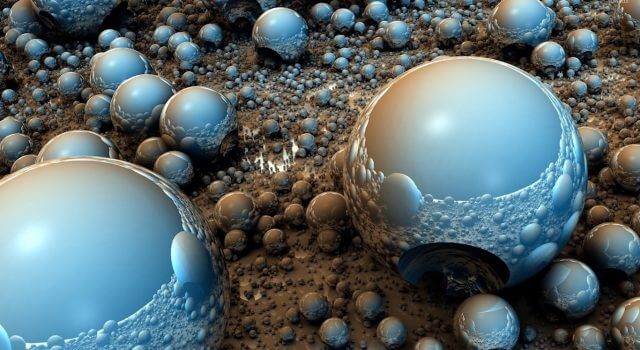 Sometimes it seems that weird stuff just sort of falls down from the sky. There are numerous cases of weird things coming down from above throughout history, often without solid answers. In recent years this has continued with a surprising amount of cases in which strange metallic orbs have come down out of nowhere to leave people scratching their heads and wondering what to make of it all. Here we will look at some bizarre instances of falling metallic orbs or spheres which have managed to evade any real concrete understanding.

In 2012, villagers in northern Brazil were startled when a metallic sphere dropped from the sky to crash down at the village of Riacho dos Poços, in Brazilian Maranhão state, obliterating a cashew tree in the process. The villager who first discovered it said that it had come down after a loud crack reverberated across the sky, and would say, “I heard the noise and I went out to see what caused it. I thought it was a plane that had fallen, or an earthquake.” What he found was a strange, otherworldly object in a ditch still hot to the touch, and described as being perfectly spherical and about 1 meter in diameter and weighing 50 kilograms. When other villagers arrived and dug it out, they found that the sphere seemed to be hollow, except for what seemed to be a bit of liquid swishing about within. Around 2,000 people from all over the area flocked in to see the “UFO,” and it created a panic among some of the more superstitious of the locals. Rather ominously, military police soon arrived and took the sphere away, saying that it was just a part of a downed satellite.

The state of Texas in the United States had a similar incident in 2013, when an electrician by the name of Dean Gentz spotted a weird object near a cow pasture on his land, near the town of Buna, in east Texas. Upon inspection, it could be seen that the object was a brown metallic orb around 35 centimeters in diameter and bearing signs that it had undergone extreme heat exposure. Gentz would say if it:

What I noticed when I first saw the object got my attention. The way one side of the sphere was melted – I didn’t think someone could have done that with a torch, plasma arc, arc gouge, or any other means I knew about. Also, when you heat metal, it will cool and have a different look. As in this case, the melted metal spalling was blown back over the sphere, I knew that it had been done in an ‘event,’ not by humans. I am not sure how many people would have noticed these things. Several people said they would have thrown it away.

Another mystery sphere would be found in a pasture in the same general area not long after, and despite Gentz’s efforts to figure out where it came from, he has gotten no answers from NASA or any other agency he has gone to for more information. In 2014, residents in Mengchang village in the province of Heilongjiang, China, were woken by a booming noise, after which three “fireballs” were spotted descending from the heavens. These fireballs proceeded to land in some farming areas, and when the locals went to investigate they purportedly found three separate “metallic balls half-covered by a layer of jagged edge,” weighing around 90 pounds and with a diameter of about 30 inches. Once again, officials reportedly were quick to move in to confiscate the strange objects, and offered the explanation that they were debris from Proton-M Russian rocket carrying a satellite, which had plummeted to earth somewhere in Kazakhstan after a failed launch. Is that what this was or is it something more mysterious? The Chinese officials aren’t saying.

The following year would see several other instances of mystery spheres falling from the sky. In 2015, three “strange black orbs” appeared within impact craters in fields in the area in and around the town of Villavieja, Spain. Each of the weird black objects was estimated to be 80 centimeters in diameter with a hole at one end and appeared to built around wire frames. One news outlet El Vardad, would report that it was a “pressure vessel for gas (COPV), possibly from a space station or flying saucer. These objects are made of an unknown material – and appear strong enough to survive reentry into the earth and even catastrophic explosions.” Interestingly, the civil guard soon moved in to guard the area and keep the press from getting close. The mayor of Villavieja would say:

Where are these objects coming from? Why are they falling here precisely? Will more fall, and what would happen if any of these balls fall into a highly populated area? Citizens have real concerns about what is happening and deserve an explanation. These objects are made of a material so strong it survives almost intact upon falling to earth and can cause catastrophic explosions.

That same year, a goat farmer in the town of Calasparra, Spain, reported that a cylindrical, semi-spherical metallic object had crashed down right before his eyes. Officials in biohazard suits reportedly retrieved the object and drove it off in a truck. Bizarrely, at around the same time on the same day and even at the same latitude, a similar object fell on a beach near the city of Sakarya Karasu, Turkey. Once again, military officials immediately moved in, took the object away, and didn’t even bother to offer an explanation.

In January of 2016, news began making the rounds that “giant metal space balls” were falling from the sky in Vietnam. On different occasions, a “thunder-like noise” was heard, and three orbs of varying size ranging from 6 to 50 kg in weight appeared out of clear skies to crash into the ground below in close proximity to each other. The first reportedly came down at a garden in Yen Bai Province, the second crashed into the roof of a house around 2 miles away, and third and largest of the spheres came down at a stream in the neighboring province of Tuyen Quang. One of the spheres was found to be hollow, while another had Russian letters written upon it, leading to speculation that they were from a Russian satellite or weather balloon, or the compressed air tanks of a rocket or an aircraft.  At least that is the official prognosis, but others have disagreed, for instance UFOlogist and conspiracy nut Scott Waring of UFO Sightings Daily, who called them “alien drones or parts of damaged alien structures in space,” and he has said:

I believe these are cloud orbs otherwise known as alien drones that were struck by lightning or shot down. Alien tech does not usually have wires and loose circuits like our tech has. Alien tech is on a micro scale and is built into the metal of the craft itself. Much like a 3d printer printing the wires inside of a toy robot so when it’s finished, all you do is add the batteries. Alien tech has it all built in, except for their propulsion system.

One of the Vietnamese spheres

Such conspiracies have only further been fueled by reports that military officials were quick to come whisk the spheres away, and claims that they were made of an unknown “special alloy.” The orbs remain unidentified and have been confiscated by the government for testing. What is going on here? Finally, in 2018 three metallic spherical objects were found in Peru’s southeastern Andean community, shortly after reports had come in of blazing objects in the sky. Officials who retrieved the objects claimed that they were pieces of a rocket or satellite that had burned up and melted on re-entry, although others claimed they were meteorites. So which is it?

In the end it is all rather puzzling. These things keep falling from the sky and there doesn’t seem to be a real, agreed upon answer to it all. Are these just instances of meteorites or pieces of space debris? Why is it that in almost every case officials swoop in to take it all away and give vague answers, if any? What is going on here? It is hard to say, but such reports keep coming in and stirring discussion and debate.

Please remember we all have different opinions, Think Before You Speak or Write Something that is cruel to Others. After all, We are only Humans.Wishing you clear skies and wide eyes.To share your experiences or just leave a comment there is a area below. Read or listen. We are the change the world has been waiting for! Have you witnessed an unidentified flying object? You are not alone. Whether you think UFOs are black projects, extraterrestrial craft, something else altogether, or just don’t know, again: you are not alone! Unconditional love. The road we all get to walk. Unconditional love is like the sun. WE ARE THE DISCLOSURE !!! ~~~ WE HAVE NEVER BEEN ALONE!!! LOL=Love and Regards, Happy Quarantine ! Thank You, Nancy Thames : )