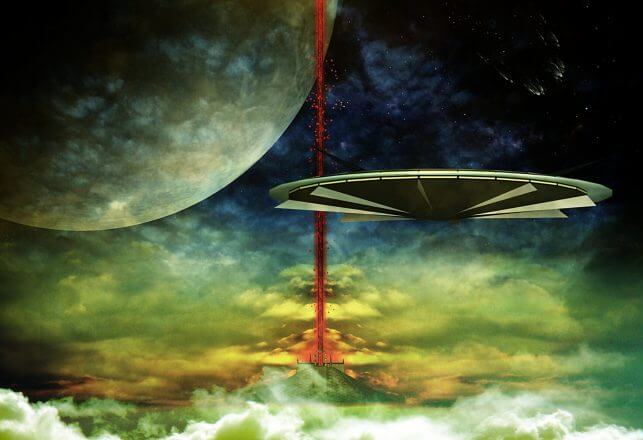 Are aliens hiding a city-sized space station behind our moon, just peeping around the back of it from time to time, in broad daylight and clear skies, to see what we’re up to?  That’s what a video posted online recently claims to show. As I’ve postulated before, maybe aliens are trying desperately to get our attention but we’re so thick-headed and resigned to disbelief that they’re forced to keep upping the ante. They tried crop circles, but no one cares about corn. They tried blowing up our cows, but no one cares about cows. They tried shutting off our nukes, but apparently no one cares about nukes either. They’ve sent down mothman, bigfoot, the men in black, time and time again and the people of earth see these impossible things and say “nah.” Alright, they think, time to bring out the big guns. Show ’em the mothership.

It seems to show an impossibly huge UFO flying near the moon and disappearing behind it. The UFO looks like a classic doughnut shaped space station like you would see in nearly every piece of science fiction. It’s also what a real giant space station would probably look like. The video was shot in broad daylight, in a cloudless sky. The camera shake is reduced to a minimum, while still being within the limits legally required for a UFO video.

It sure does look like a big ring of something weird flying around the backside of our beloved satellite. But, like always, there’s a few problems with this video. First, the video is title “123,” has no description, and is tagged in the category “music.” There is no music. We have no details on where, when, or how this video was shot, so there’s no way to check if anyone else saw something strange.

But that shouldn’t really be an issue considering problem number two: If a ship the size of New York City was flying around the moon, in broad daylight, someone else would have seen it. He’s not in the middle of nowhere, you can hear traffic in the background of the video. There’s 7.53 billion people on this planet, and no one else said “well would you look at that?” Maybe the aliens need to up the ante a bit more, because apparently no one cares about city sized spaceships orbiting the moon, either.

Maybe something like this is all that will get our attention.

Lastly, when the ship crosses behind the moon it looks like that edge of the moon sort of flattens out as the ship crosses behind it, which would be proof that it is computer generated. I could be wrong, but this video just doesn’t seem authentic. I don’t want to call it a hoax, because I don’t think that’s what it is. I think a dude was testing out his video editing skills and uploaded the video to YouTube, probably to show a friend or collaborator and never meant for it to gain traction—hence the “123” title and the very wrong category. The video itself doesn’t claim to show anything.

Which makes me a bit more comfortable, honestly. If there was a giant doughnut orbiting the moon and still no one cared, we’d have some big problems on our hands.