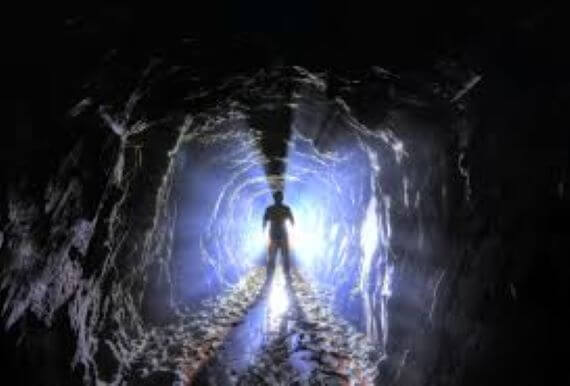 Out in the remote wilds near the village of Tsarichina, in the western region of Kostinbrod, Bulgaria, lies a strange little circular formation that almost looks like a cave that has been filled in with concrete. There isn’t much to it, really, and a lot of people might pass right on by it without even noticing it is there at all. Yet, this nondescript little piece of land is steeped in mystery, and is ground zero for all manner of strange tales of secret operations, UFOs, aliens, and unexplained paranormal phenomena. They call it the Tsarichina Hole, and its story is very bizarre indeed.

The story goes that On 6 December, 1990, the Bulgarian military moved into the region and began excavations on the site, supposedly called “Operation Lightbeam.” Whatever was going on was top secret, as armed men turned curiosity seekers away and trespassers were allegedly dealt with harshly, and the whole place was crawling with military personnel. The rumor at the time was that they were looking for an ancient treasure said to be buried there, the purported hidden treasure of King Samuil. However, according to stories that would eventually leak out, they found something altogether more bizarre down there in the bowels of the earth.

According to supposedly leaked information from a Colonel Tzvetko Kanev, the team’s dig reached a strange spiral tunnel and a mysterious rectangular slab made of an unknown material that could not be explained. Apparently a remote viewer by the name of Eli Loginova was brought in to help them assess the tunnel and the object, and she told them that the slab of stone was a “biological protection slab,” and that it was covered in dangerous bacteria and should not be disturbed. Another psychic called Baba Vanga also claimed that there was a skeleton down in the hole that was “neither man, nor woman,” and both of these psychics claimed that there was something down there in the darkness sending out telepathic messages.

The military apparently nevertheless went into that tunnel to try and excavate the object, and along the way they discovered other anomalies down there, such as a slab in the shape of a concave lens, a depiction in the stone of a humanoid figure of a height dwarfing that of a human, and another tunnel with completely smooth walls, a silvery floor, and walls covered in some sort of hieroglyphics. When they actually tried to approach the slab that they had come from, it was reported that they were repelled by a bright beam of light, and what seemed to be some kind of invisible force field that kept them from getting too close to it. The psychic Vanga warned that the cave was protected, and that whatever was down there was not yet ready to be discovered by humans, that it would defend itself with violent force, if necessary. Other psychics corroborated this, and the clairvoyant Gina Demirova would warn of this:

When excavations in Tsarichina were held, the aliens told me that the research must stop. Do not dig, it’s not your time! There is the center of the Earth – at a depth of 2000 km, there is a finding such as crystals. It is big as the sun when it rises. Do not touch! People will not reach it, but they will disturb the atmosphere. This is a big crystal, which is dangerous and will stay there as long as the Earth. It controls its movement. Stop digging because the earth will perish. Hard days will come for your people. There will be new, many terrible diseases, if you dig in Tsarichina. In the hole, there is underworld, but this is not hell. There are live people like you down there, but their origin is different. There is also space device that is found there. It was sent by an extraterrestrial civilization. There are cosmonauts down there. Thousands of years ago, when your country did not exist, a civilization from another planet sent a spaceship with three astronauts on Earth. They were not humans but robots. They were sent to explore life on Earth. They suffered damage and the space-ship crashed in Tsarichina. With every meter of digging down there, higher and higher radiation will be emitted. Do not dig into Tsarichina hole, it is not your time now!

Alright, then, get all of that? Regardless of this warning they kept digging, and as this excavation was going on there would supposedly be quite a lot of strangeness reported from the surrounding countryside as well. Scared locals were seeing UFOs in the area, ghostly apparitions, and some of them even claimed that they were receiving thoughts beamed into their heads that were not their own. In the meantime, during the full 2 years that this excavation would go on, the remote seer Loginova would claim to be in constant telepathic contact with the entities from the tunnel, who were channeling messages through her. She would allegedly eventually transcribe over 1,000 pages of these massages, and she says they were received in codes that she would decipher. She explained in an interview:

The codes are my cipher letters. More than 1000 pages, which I started receiving during the Tsarichina excavations. The texts are incredible. This is a compilation of ancient writings, which tell about the story of the human creation. How it was created, how it was brought to Earth, how it must survive, what we must do to keep the Earth alive. The Earth is a part of the common planetary synchronicity. This cosmic collactorium wants the Earth to survive. The synchronicity must not be broken, because chaos will ensue. This information is contained in the codes or the ciphered letter received on Tsarichina. They tell about the so-called energy humans. They are marked by them, and through the energy humans they keep the synchronicity on Earth. They choose to come into contact with, in order for this information to be received, because it is very heavy and not every brain can handle that amount of information. I know what the truth is.

Apparently, this was a little too much for other psychics who were purportedly brought in to handle, as one allegedly quit, and another remote viewer Marina Naplatanova committed suicide during the dig. Then, on November 19, 1992, the military suddenly packed up is operation, sealed the hole with concrete, and left. There was no explanation given for why they had abandoned the project, and indeed no official reason for why they had ever been there in the first place. All of the supposed evidence that had been collected for anything found down there in the bowels of the earth was whisked away, labelled as classified, and buried. Loginova would lament:

All the notebooks mysteriously vanished along with all the journals that we composed in Tsarichina. The film, which we shot before the dismissal of the project, also mysteriously vanished. I don’t have any evidence left to certify our work. I can use only my words and hope that people believe me.

Over the years since the excavation stopped there have been numerous rumors and wild tales devoted to the Tsarichina hole. Depending on the story the military found an interdimensional portal down there, alien skeletons, giant power crystals, plans for alien technology, or the secrets of the lost continent of Atlantis. There are also stories that they whisked of a triangular spaceship, leading it to be called the “Area 51 of Bulgaria.” With a story this surrounded by mystery and with this little evidence to back it up, you could come up with whatever theory you want and it would be just as viable as anything else being floated about. Although the story of the Tsarichina Hole has become rather well-known in Bulgaria, it is a mystery that remains rather convoluted, unclear, and without much to show that any of this happened at all. Whatever was going on here, if anything, has been lost to time, possibly covered up, and we may never really know for sure.