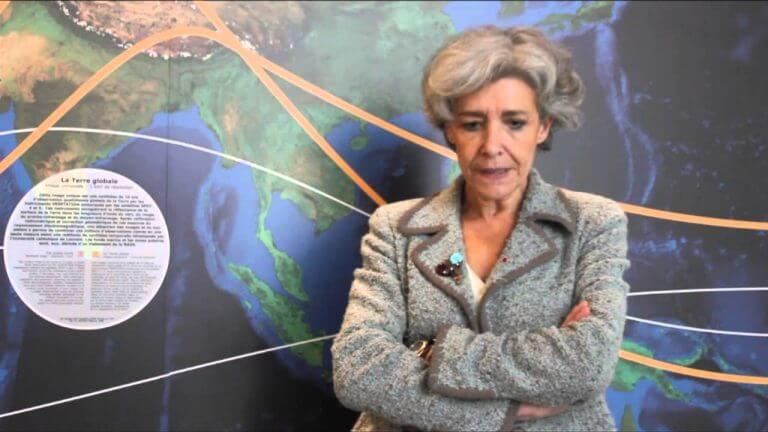 When the subject is UFOs, astronauts and politicians, the names that have been coming up recently in the U.S. are the late astronaut/ufologist Ed Mitchell and Clinton staffer John Podesta. However, in France, one person fits both descriptions – Claudie Haigneré, France’s first woman in space who later became a politician and is known for a suicide attempt after screaming, “Earth must be warned!” A video about her resurfaced this week and it’s worth looking into her story and her warning.

Claudie André-Deshays was born in 1957 in Le Creusot, Saône-et-Loire. She is a rheumatologist, has a PhD in neuroscience and certificates in biology, sports medicine, aviation and space medicine. In 1993, she was a back-up crew member for the 1993 Mir Altaïr mission which included her future husband Jean-Pierre Haigneré. She made it to the Mir space station in 1996 as part of the Russian-French Cassiopée mission and in 2001 became the first European woman to visit the International Space Station as part of the ”Andromède” mission. The asteroid 135268 Haigneré is named for her and her husband.

Astronaut Claudie Haigneré on the ISS

Haigneré entered French politics during the term of conservative prime minister Jean-Pierre Raffarin, serving as minister delegate for Research and New Technologies from 2002 to 2004 and minister delegate for European Affairs from 2004 to 2005. Despite her efforts, budgets for scientific research were cut. After leaving politics, she worked in a biology lab at the Pasteur Institute.

That’s where the story gets strange. On December 23, 2008, it was widely reported that Dr. Haigneré was rushed to the hospital after allegedly taking an overdose of sleeping pills. It was reported that she was found conscious but had to be restrained while screaming “Earth must be warned!” before lapsing into a coma. Haigneré recovered, blamed the incident on “burnout syndrome” and is now the director of the Cité des Sciences et de l’Industrie – the largest science museum in Europe.

If she did scream ““Earth must be warned!”, what was Haigneré trying to warn us about? One theory is that she was convinced that Earth had been visited in the past by aliens who genetically engineered the human race. This could be linked to her work at the Pasteur Institute where some sources reported she was working on “Human/Alien DNA research.” There doesn’t seem to be any evidence of that, but there was a mysterious fire at the lab a few hours after Haigneré’s suicide attempt. No cause was determined and the damage was said to be minimal – could it have been a cover to remove sensitive documents on her research?So we have an astronaut/politician/DNA researcher who appears to attempt suicide after possibly screaming a warning to Earth, not just France. Throw in a mysterious fire and you have the makings for a good conspiracy. Haigneré’s suicide story has popped up occasionally since 2008, often when something happens to a prominent UFO expert. The mysterious death of Max Spiers may have triggered the latest interest. The Wikileaks leaks connecting political aide John Podesta to the late astronaut and ufologist Edgar Mitchell may also have prompted sites to revisit Haigneré’s story about her connections with space, UFOs, government and alien DNA.

Is Claudie Haigneré still worried about something?

Or is it something else? There’s been no other comment from Dr. Haigneré. Was it just “burnout” that drove her to the brink? Has she given up on warning Earth or has she been told that it’s futile? Is this a sign of the power of government over ufology?

Why does this story keep surfacing? Why now? Will we ever know the truth?