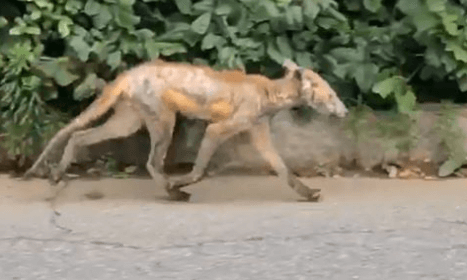 Fans of the Chupacabra know that this cryptid comes in two flavors: the traditional upright, spike-backed, reptile-like, goat blood sucking creature that originated in Puerto Rico, and the four-legged, dog-like, furless creatures that appear much more often and don’t look anywhere as frightening as their reputation would suggest. Today’s sighting is of the second kind, but it’s in a state that has its share of strange creatures and invasive species. Could this be one to add to the list?

“What in the world is that?”

According to the website GAFollowers (GA is Georgia’s two-letter abbreviation), that’s what “people across Georgia” are wondering after seeing a video of a strange-looking creature spotted by Parker Lipman in Buckhead. Buckhead? Those familiar with Atlanta know that Buckhead is an exclusive, uptown residential, business and financial area in the business district of Atlanta and would more likely be the home of predatory lenders than predatory cryptids. Yet that’s where Lipman claims he saw the creature  and, after posting it on social media, sent it to GAFollowers for great coverage in the hope that someone could identify it.

After weeding out all of the derogatory comments, the few left seem to agree that Lipman’s creature is a fox, coyote or dog with mange – a common problem among wild canines and furry mammals living in cities where they’re often malnourished or sick. Buckhead was at one time more wilderness than it is today – the name comes from a deer whose head was once mounted in a prominent place in the town. Now it’s pretty much developed, so any strange creatures are probably invasive.

Georgia has plenty of wilderness left to house alligators and a variety of snakes, reptiles and amphibians … so the Puerto Rican style of Chupacabra might survive better there than a sickly dog-like one. On the cryptid side, Georgia has its share of Bigfoot sightings, but the monster the state is most famous for is the Altamaha-ha — a giant serpent-ish water creature which lives (allegedly) in the Altamaha River and is more akin to the Loch Ness monster than a Chupacabra. A better possibility is the Wog – a demon dog said to live in a boggy mud volcano near Winder, Georgia, which is a mere 50 miles from Buckhead. The native Creek people called it Nodoroc – the “gateway to hell” – and used it to dump bodies of executed prisoners that were taken to the underworld by the red-eyed, fork-tongued Wog. Europeans who came to the area blamed the disappearance of livestock on the Wog.

It could be a figment of the imagination of stir-crazed Buckheadians dying to get out of coronavirus lockdown and see anything that’s outside. However, the photograph shows the creature is real, but the needle still points to ‘figment of the imagination’ when trying to call this poor creature a Chupacabra. If it had the money (and was real), the Puerto Rican Chupacabra would undoubtedly sue all of these people defaming its character by using its name in association with sick foxes and canines. Many of the comments on the photo say the local fox recovery team has been notified.

Sorry, Buckhead – keep looking for your monster. Maybe you can find another Hogzilla.

I actually saw one in Buford Georgia while living there in 2008 it was at night but with lots of  street lights on in our neighborhood and I watched for awhile with my Binoculars and Night Vision Binoculars and I wasn’t sure if it was a Chupacabra or a badly manged dog with poor nutrition. It was definitely different and was scavenging around in our developing neighborhood of empty lots. Autumnbrook is behind the Toyota Dealership. Close the Peach Tree Mall of Georgia in Gwinette County.