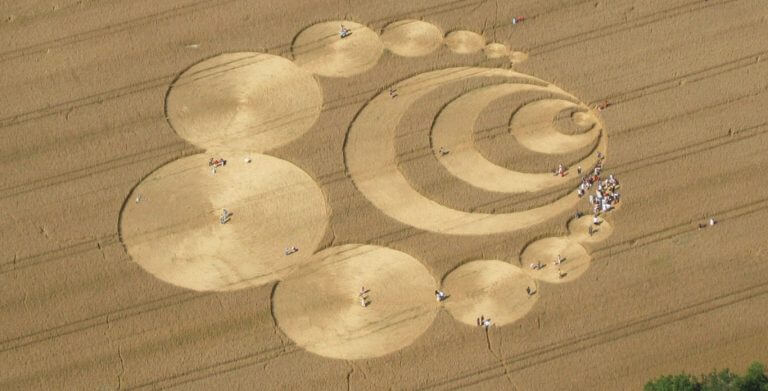 On August 15 I wrote an article here at Mysterious Universe titled “My Time Spent in the World of Crop Circles.” It began as follows: “Now and again, people ask me for my views on the Crop Circle phenomenon. Well, I’m sure the vast majority of them are made by people, although calling the creators ‘hoaxers’ is way off the mark. To understand my views on the phenomenon, check out this link which will take you to one of my earlier articles here at Mysterious Universe. Personally, I think that article gets to the heart of the matter – albeit in a very strange and alternative way. With that said, I’ll share with you a few of my many experiences in the weird world of the Crop Circle.” Now, onto today’s article. It is focused on a phenomenon that came long before Crop Circles were on the scene. It is, however, a phenomenon that has some degree of connection to the famous formations that appear in the fields of Wiltshire, U.K. every summer. With that said, read on. On February 10, 2018, journalist Anna Levy wrote an article for Australia’s Brisbane Times titled “UFO Culture: State Library of Queensland collects its own X-Files.” In part it stated:

“A banana grower [named George Pedley] drove his tractor along a narrow track at the edge of a sugar cane farm in Tully, north Queensland on January 16, 1966. The weather was calm, the morning sun high in the sky. The tractor passed over the track with its usual rumble, but beneath it the banana grower detected a faint hiss. He leant forward to investigate, assuming his tyres had a leak, but his eye caught something else instead. A saucer-shaped object, silver-grey and about 25 feet in diameter, rose before him. The object ascended slowly from the nearby lagoon to the treetops before tilting slightly and speeding away to the south-western horizon. The man ran through the thick reeds and sword grass surrounding the lagoon, forcing his way through the undergrowth until he could see the water. A large whirlpool had formed, devoid of all plant life. Over the next few hours, the dead reeds below the eddy rose to the surface, forming a ‘nest’ within which there lay a perfect imprint of an inverted saucer.”

Pedley himself said: “Suddenly, an object rose out of the swamp. When I glanced at it, it was already 30 feet above the ground, and at about tree-top level. It was a large, grey, saucer-shaped object, convex on the top and bottom and measured some 25 feet across and 9 feet high. While I watched, it rose another 30 feet, spinning very fast, then it made a shallow dive and took off with tremendous speed. Climbing at an angle of 45 degrees it disappeared within seconds in a south-westerly direction.”

Over at the Old Crop Circles website, there is the following: “The ‘saucer nests’ of Tully, 1966 are undoubtedly the most famous circles known before the modern era. Even Doug Bower, who claimed to have started the crop circle phenomenon in 1978, cited Tully as his initial inspiration, remaining virtually mute on what might have caused the nests. (It definitely wasn’t him; he once stated that local farmers had made them, without further explanation.) Although these are universally called the Tully nests, they were in fact much closer to the very small town of Euramo, which lies to the south of Tully. The spot is known informally as Horseshoe Lagoon. These are very widely documented, particularly in the crop circle press, where virtually all publications mention them. Although the body of literature pertaining to this event is sizeable, we will only provide a basic outline below. If readers want more detailed accounts, there is plenty of information available in books and on the internet.”

As is noted at ufo.fandom.com: “During the course of the investigations, as many as five other ‘nests’, all smaller than the original, were discovered. In some of these, the reeds were rotated in a counter-clockwise direction and a couple of them showed signs of burning in the center of the nest. Samples of the original nest were sent to Brisbane for analysis, but nothing unusual was detected. Other than being part of the ‘nest’, the only unusual thing about the reeds was that they turned brown in about 8 hours, whereas reeds uprooted by hand in the lagoon took three days to turn brown. In a 2018 interview with Robbie Graham, Australian UFO researcher Bill Chalker said: “Northern Queensland around Tully has had a rich UFO history particularly since the classic 1966 daylight UFO physical trace in Horseshoe Lagoon. St. George and Boulia Queensland also had a prolonged history. Coonabarrabran in NW NSW has a prolonged UFO focus, as well as the Bourke area. Tyringham on the Dorrigo Plateau and around Mount Butler/Armidale in the New England district has had a recurring focus. The Kempsey area, the Central coast and Blue Mountains regions of NSW also have long UFO focuses. The South coast of NSW, particularly around Kiama has a lot of UFO activity. Leitchville- Echuca, Rosedale- Gippsland and the Mallee district of Victoria seem to host a lot of activity.”

While the “UFO Nests” of Australia did not create as much publicity as the Crop Circle phenomenon certainly has, they are an important part of 1960s-era Ufology.