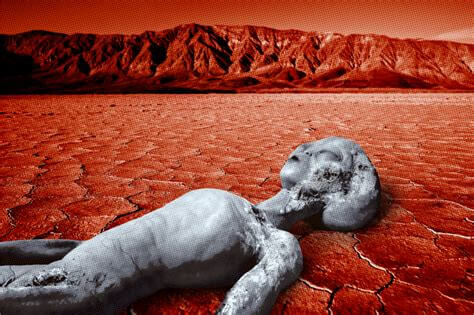 That was the question put to me a few days ago while I was doing radio. I have to say I’m probably not the best person to give a positive response on that same question. After all, I’ve written two books on the Roswell affair of July 1947, both of which show why aliens didn’t crash on the Foster Ranch, Lincoln County, New Mexico. I have to admit that up until around 2001 I was a true believer in Roswell. That soon changed, however – and to a significant degree. My view is that if Roswell – the most credible “UFO crash” case for many – turns out not to have alien origins, then what chance is there for the other, lesser credible cases? With all of that said, however, I can say for sure there are claims of dead aliens on ice in well-guarded facilities in the U.K. We need far more than mere claims, however. Right now, though, that’s all we have. I’ll begin with a strange story that dates back decades and that involved a famous journalist who died under controversial circumstances.

Dorothy Kilgallen was an investigative journalist who died in 1965 – when she was doing extensive research into the JFK assassination of November 22, 1963. It’s the 1950s we need to focus on, however. While on vacation in 1955, Kilgallen and her husband, Richard Kollmar, went on holiday to England. While there, she heard a fantastic story. In Kilgallen’s own words penned at the time: “I can report today on a story which is positively spooky, not to mention chilling. British scientists and airmen, after examining the wreckage of one mysterious flying ship, are convinced these strange aerial objects are not optical illusions or Soviet inventions, but are flying saucers which originate on another planet. The source of my information is a British official of cabinet rank who prefers to remain unidentified.” Kilgallen had more to say. She quoted her source as telling her:

“We believe, on the basis of our inquiry thus far, that the saucers were staffed by small men – probably under four feet tall. It’s frightening, but there’s no denying the flying saucers come from another planet.” Kilgallen had more: “This official quoted scientists as saying a flying ship of this type could not have possibly been constructed on Earth. The British Government, I learned, is withholding an official report on the ‘flying saucer’ examination at this time, possibly because it does not wish to frighten the public. When my husband and I arrived here from a brief vacation, I had no premonition that I would be catapulting myself into the controversy over whether flying saucers are real or imaginary.” It’s important to note that Kilgallen’s informant said the alleged aliens that flew the crashed UFO were “probably under four feet tall.” The word “probably” implies that even if the U.K. government did have a crashed saucer, they didn’t actually have dead aliens on ice. And that’s where the story ends (aside from the highly controversial “Marilyn Monroe, Kilgallen and UFOs” document that surfaced publicly in the mid-1990s).

Now, let’s take a look at the second case I have on record. I should clarify that I have more than two. The problem is that the additional twelve cases are so vague – and of a typical friend-of-a-friend-type – they are barely worth addressing. There is, however, one case (a notorious one, to say the least) worth looking at. It all went down (quite literally, perhaps) on the night of January 23, 1974 on the Berwyn Mountains, North Wales. Depending on who you ask, what happened was the crash of a UFO and its crew, a secret military experiment, an earthquake that occurred at the same time as a meteor shower, or sightings of what have become known in Ufology and Forteana as “ghost lights.” But, what about the “dead aliens” angle to all of this? Let’s have a look.

In 1996, an alleged military whistle-blower came forward, claiming that aliens had crashed on the Berwyn Mountains back in January 1974. The pummeled bodies of the dead crew were said to have been secretly rushed to Porton Down (a secure facility in the southwest of England that has worked in the fields of chemical warfare, biological warfare, and hallucinogens), for hasty examination and even hastier preservation. As is so typically often the case in such situations, the source of all this chose not to provide his name to the UFO research community of the day. Instead, he preferred to lurk in the darkness, shrouded in mystery and intrigue. He shared his story only with the late Tony Dodd, who was a North Yorkshire police sergeant and UFO investigator. Dodd chose to give his talkative soldier the alias of “James Prescott,” who was said by Dodd to have been long-retired from the British Army. There’s no doubt that something happened on that night in January 1974. And there’s also no doubt that the Prescott story fired up the U.K.-based UFO research community of that time (1996). That was the very same time when an X-Files-type “I want to believe” fever still had a grip on Ufology. You only have to look at the names of all the glossy, UFO-themed newsstand magazines that hastily hit the newsstands in that era: Alien Encounters, Sightings, UFO Reality, The X-Factor, Enigma, UFO Magazine and…the list goes on. All of those magazines are long gone.

I remember very well the debate and controversy surrounding the Prescott claims in the 1990s. Some UFO investigators were intrigued by it. Others were amazed by it. The fact is, though, that all we have now is all we had back then: an unknown source (with a faked name), and a UFO researcher – the aforementioned Tony Dodd – who stubbornly refused to reveal the real name of his informer, even though he could. For some in Ufology, that might be enough to make a case. It’s not enough for me, though, and it shouldn’t be enough for you, either. Of course, I can never say for sure there aren’t any dead alien bodies hidden away in a well-protected underground bunker below the U.K. countryside. On the basis of the “evidence” that we have right now, however, I say we need way more before we can even come close to making such a case.