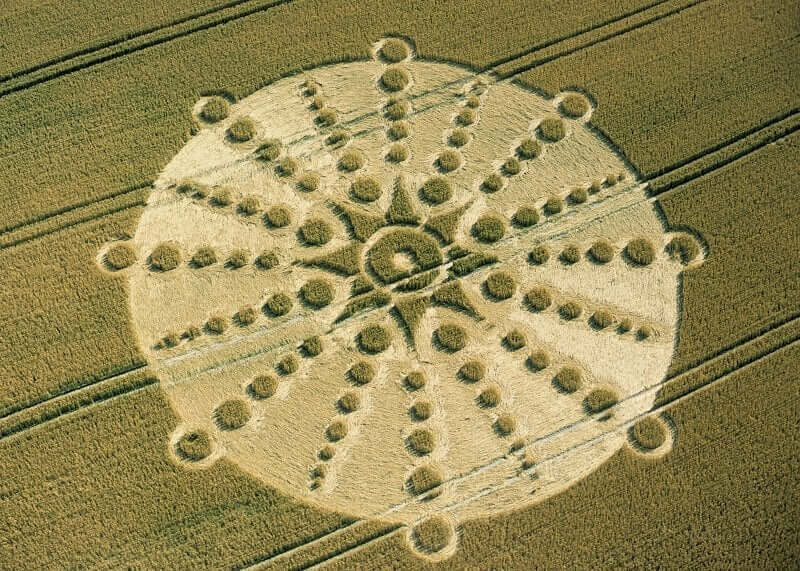 Are crop circles real? And if so, who (or what) creates them? Many are hoaxes, but there are lots of other theories – Here’s what the evidence says.

It’s been a while since I’ve done a general post about a particular type of phenomenon – in fact I rarely write posts like that in the first place. But in this post, I want to discuss crop circles. Specifically to ask the question: Are crop circles real? And if so, who (or what) creates them.

The main reason I don’t usually write about a general type of phenomenon is because the world is full of better and more dedicated researchers than myself. In fact, the crop circle mystery has been investigated by many more man-hours than I have in my entire life to give.

But that doesn’t mean I don’t have some ideas to add to the conversation.

By far one of the easiest questions to answer – crop circles are real. There are pictures, photos, videos, and if you live in a hot spot like the UK, you can probably visit one in-person.

But that’s not what you came here looking for is it? When people ask if crop circles are real, what they actually mean is, “are crop circles more than just a hoax?” That is a much more difficult question to answer.

We know that many crop circles are man-made. There’s no debating the fact that hoaxers have made their mark on fields all around the world.

In fact, as it turns out, humans are the only creator of crop circles that have been proven beyond the shadow of a doubt.

But that doesn’t mean there can’t be other causes of crop circle formations. Crop circles have been around much longer than most people realize, dating back over a thousand years.

Who or What Creates Crop Circles?

Aside from hoaxers, several theories exist explaining how crop circles come into being. Some theories have more supporting evidence than others. Here are some of the most popular theories.

When I was an early teenager and first read about crop circles, my immediate thought was crop circles were places where a flying saucer had landed. I wasn’t the only one because by far, this is the most popular theory about where crop circles come from.

There’s the circular shape to consider along with crops that appear to have laid down in a rotational pattern. If a spinning disc did land in a field, this is exactly what one would expect it to look like.

Crop circles frequently appear after reported UFO sightings. It’s also no coincidence that places like the UK, where 90% of the world’s crop circles appear, are also places where UFO sightings are very common.

Unfortunately without definitive proof of alien visitation, it’s impossible to prove that any crop circles have been the result of it. That’s not to say it can’t be true, just that there isn’t enough evidence to state so definitively.

Some of the first crop circles were nothing more than single circles of flattened wheat. Some people thought maybe these were the result of some type of tornado-like weather event.

The evidence for weather patterns is pretty scarce. Tornadoes and dust devils leave paths of destruction in their wake. Thunderstorms are simply too big and messy to leave behind neat little circles of flattened wheat.

Ball lightning has also been theorized as a possible source of crop circles, but one would typically expect this to result in burned fields as well.

This theory is relatively new. It’s the idea that some type of psychic energy from people manifests itself in the form of a crop circle.

In fact, there are people who perform group meditation with the intent on creating a crop circle in nearby fields. They claim to regularly concentrate on a particular design that ultimately comes to being in the field.

What little evidence is available to support the theory is anecdotal at best.

Plasma is probably one of the most likely explanations for at least some crop circles. When plasma moves through a magnetic field, it tends to spiral and also emits microwaves[7].

Both of these features of plasma are important because they can explain two key elements of ‘authentic’ crop circles.

Since plasma tends to spiral, it makes sense that we’d see formations that include crops laid down in a spiral pattern.

In addition, the emission of microwaves from spiraling plasma could explain some of the node deformations observed in some flattened crops. In fact, some of these deformations have been replicated in a lab by putting the crop samples in a microwave oven.

So while we lack definitive evidence of any specific theory on crop circle creation (other than those made by people), we should take a look at frequently cited evidence which points away from human activity.

This evidence typically involves physical differences in the crops within the circle vs. those outside the formation.

One of the big indicators that crop circle believers look to are alleged differences in the growth nodes of crops inside circles.

The nodes in crops are the growth points between different sections of the plant. Researchers point out significant differences in these nodes when compared to crops that are not flattened.

The nodes are sometimes elongated or burst entirely. In addition, the water content appears reduced in the nodes[4].

While explanations of these differences include everything from lasers and extreme heat, there is no conclusive explanation. For that matter, this could simply be part of the physical damage a crop might take when being stomped to the ground by a hoaxer.

High Deposits of Iron Oxides Inside the Circle

Crop circle researchers have done some limited soil samples and discovered in some cases that the concentration of iron oxides are much higher than normal within the confines of a crop circle.

Those who study crop circles claim this is evidence of a magnetic field having been applied at the site. Such a magnetic field would certainly create a concentration of iron oxides (which are normally in the air) to be deposited within the area.

The source of such a magnetic field would be a complete mystery to science if it actually exists.

It’s also worth to note that hoaxers are known to blow iron filings into a circle in order to make it appear more authentic[5].

Seed germination can also be found to have changed within a crop circle.

When compared to crops outside the formation,

Depending on what type of crop and what phase of growth it was in, the germination rates inside the circle vs. those outside the circle might be higher or lower[6].

There have been many studies that confirm this to be the case but no good explanation seems to be available.

Again, we must consider the possibility that these changes could simply be the result of random physical damage caused by hoaxers.

A few crop circle formations appear to have an electrical charge left on the surface of the crops[7]. Researchers claim this suggests the crops were bent by some type of electrical force.

While nature does provide some potential culprits to create the electrical forces needed to lay down vegetation, we really don’t know what could cause this.

In addition, the electric charge could be a result of the act of flattening the crop. Whether the flattening was man-made or not, as the crops get pushed down, they would rub against each other causing an electrostatic charge.

Crop Circles: A Mystery (but most are hoaxes)

Based on my research, there’s a good chance that 95% or more of crop circles are man-made by hoaxers or ‘crop artists’. The fact that most crop circles appear in the UK is a testament to this. It’s hard to imagine natural phenomena or aliens having such a strong geographical preference.

Another reason I believe most crop circles are man-made is how the level of complexity of crop circles increased year after year. Getting better at a task and consistently raising the bar to a higher standard is a very human progression. We love to one-up each other. Humans have a drive to go bigger and better in everything we do.

For those of you who disagree because some of these formations are “just too complex to be made by humans“, let me remind of you that humans are capable of incredible feats.

That being said, there’s a very thin slice of that pie that is really interesting and mysterious. A slice that just might not be man-made.

Of the small percentage of circles that aren’t clearly man-made, a good portion of them might be explained by plasma vortices. These may even be naturally occurring phenomena. But plasma vortices don’t explain everything.

Plasma doesn’t explain the observed germination differences in the seeds of crops inside a circle. Plasma also doesn’t explain formations with straight lines and sharp angles.

The only ‘real’ crop circles are the most basic of formations with single circles.

There are descriptions of simple crop circles going back into antiquity. Humans likely have clouded the waters by mimicking the phenomena and then, over time, making them more and more complicated.

Based on the evidence, this seems the most likely explanation to me.

The real crop circles may be made by plasma, or aliens, or something else we’ve yet to discover. We simply don’t know. But in true human fashion, we’ve tried to beat nature at it’s own game and make it bigger, crazier, and more complex.

Single circle formations have become increasingly rare, but it’s likely they have always been rare. Humans have just diluted the fields with lots of additional man-made stuff.

This muddying of the waters make it very difficult for investigators and researchers to find the true cause of crop circles. Just like in other areas of studying unknown phenomena, we are our own worst enemy.