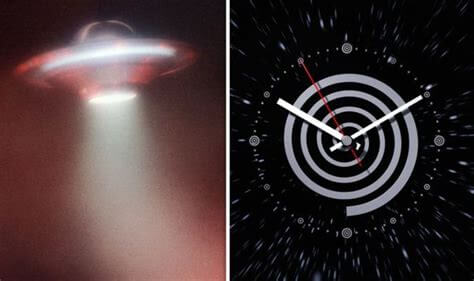 What do anthropology and UFOs have in common? In his new book, a noted anthropologist looks at the physical descriptions of the bodies and behaviors of extraterrestrials and theorizes that the reason they resemble us so much is that they’re our descendants from a future time and UFOs are actually time machines transporting them back for some kind of strange family reunion. Is this the future version of genealogical DNA tests?

“The phenomenon may be our own distant descendants coming back through time to study us in their own evolutionary past. The extra-tempestrial are ubiquitously reported as being bipedal, upright-walking, five fingers on each hand and foot, bi-lateral symmetry that they have two eyes, a mouth a nose, they can communicate with us in our own languages.”

In a recent appearance on KXLF (“Montana’s News Leader”) and in previous interviews like this one by Darkness Radio and on his website, Montana Tech professor of anthropology Dr. Michael P. Masters summarizes his new book, “Identified Flying Objects: A Multidisciplinary Scientific Approach to the UFO Phenomenon,” and his quest to “begin a new and more informed discussion among believers and skeptics alike.” That quest is to use the analytical techniques of an anthropologist who normally looks at human ancestors who partially resemble us and apply them to a study of other human-like species we know only through eyewitness accounts of alleged encounters – extraterrestrials. The end result is that Masters’ analysis suggests we should stop using the description “extraterrestrials” and instead start calling at least some of these future visitors extra-tempestrials.

“As an anthropologist who has worked on and directed numerous archaeological digs in Africa, France, and throughout the United States, it is easy to conceptualize just how much more could be learned about our own evolutionary history, if we currently possessed the technology to visit past periods of time.”

Dr. Masters sees the accounts of alien sightings and particularly alien abductions and the subsequent probings and analyses as indications that the visitors are anthropologists like himself, studying their ancestors with a tool he would love to have – a time machine. Imagine how much more we would know of ourselves, our planet and our universe if we could physically travel back millions of years to observe and possibly (let’s not ignore the “butterfly effect”) examine them.

“Many changes characterize human evolution, but it is primarily tenacious shifts toward habitual upright walking, changes in brain size and shape, facial reduction, reduced body hair, higher intelligence, and the development of increasingly complex tools and culture that most define our lineage. These changes occurred throughout hominin evolution, and have persisted in spite of marked modification to our subsistence strategy, climate, ecology, environment, and system of social, economic, and political organization.”

The is Dr. Masters’ ‘If it looks like a duck, swims like a duck, and quacks like a duck, then it probably is a duck’ line of abductive reasoning. Through millions of years of evolution and sometimes catastrophic environmental events, humans haven’t changed much physically. It’s the subtle changes that translate into leaps in intelligence and behavior. It makes sense that future humans would want more information on their lesser-developed ancestors too (there goes our self-esteem and superiority complex). In a similar manner, we obviously would like to find out what we’re going to become. Masters warns that this would be difficult.

“Modern and past human groups would only be capable of comprehending the biology, culture, and technology of these extratempestrials in a limited capacity, as we represent a far more primitive stage of their remote ancestral past.”

This theory of extratempestrials obviously adds a twist to the the idea of ancient astronauts, with the ‘aliens’ being future humans helping their primitive ancestors build pyramids in return for remembering them with statues and paintings and not destroying the Earth and ruining their future lives. That sounds like the positive conclusion Masters draws from his theory.

“Coupled with a thorough understanding of the past and modern human condition, these accounts point to the continuation of established biological and cultural trends here on Earth, long into the distant future.”

Next time you meet an ‘alien’, tell them “You’re welcome.”