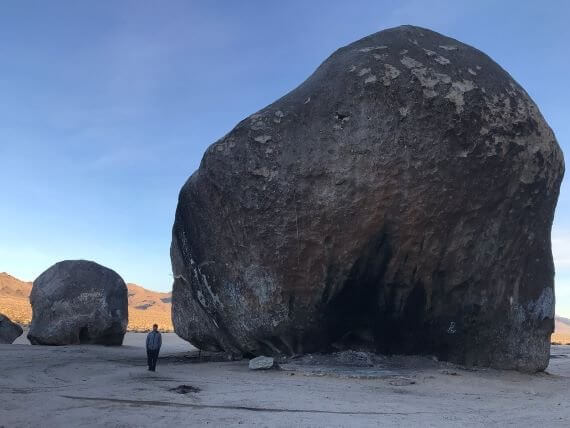 Squatting out in the dry lake bed of a desert wasteland in the Mojave Desert near Landers, California, is a massive solid granite rock that looms over the parched earth around it like some monolith from a lost civilization. Rather aptly named simply “Giant Rock,” the immense boulder is seven stories high and covering 5,800 square feet of land, making it one of the largest free standing rocks in the world. It is a formidable sight, and it is perhaps fitting that this place has long been held as sacred by the Native American tribes of the region, often seen as the heart of the Mother Earth, the people of this land once convening here to celebrate the changing of the seasons and shamans coming out across the forbidding desert to draw from its power. In more modern times, Giant Rock is also the scene of a strange tale that involves secret underground cities, aliens, a mad prophet, and a time machine.

During World War II, a German immigrant and desert prospector by the name of Frank Critzer became rather fascinated with Giant Rock, and went about tunneling beneath it looking to mine any riches he could find buried in the earth there, and he would eventually carve out rooms to use as a full time subterranean residence there. He became known as the eccentric mad loner who lived out under the rock, and he didn’t really have any friends until he met a former pilot, aircraft mechanic and flight inspector named George Van Tassel while in town pumping gas at a garage. The two got along well, becoming quick friends, and that was when Critzer began to tell him of the strange things he had experienced while living out in the desert under that mystical sacred rock.

According to Critzer, his mining had uncovered strange tunnels down there in the gloom, which seemed to have completely smooth sides as if fashioned from glass and which plummeted down into the sheer blackness of the earth below to the unknown. Critzer claimed that these mysterious tunnels often emanated a strange buzzing sound somewhat akin to static, which had become so insistent that he had even built a special radio in an effort to distinguish the frequency of the constant drone. Critzer was certain that these were no normal naturally formed tunnels, and expressed his desire to explore them further, but he would never get a chance. In 1942, he fell under suspicion of being a German spy, and was confronted by authorities determined to take him in for questioning. The stubborn old loner refused to budge, and at some point during the tense standoff the police used a gas grenade to flush him out, which unintentionally ignited some mining dynamite that was lying around and erupted into a huge explosion that killed Critzer but left the rock itself relatively unfazed. The siege had ended in tragedy for Critzer, but for Van Tassel it had opened up an opportunity.

In 1947, Van Tassel moved with his family from his home in Barstow, California in order to start a new simple life out in the desert, and remembering the odd mysteries he had heard from Critzer he decided to move to Giant Rock. He moved in to Critzer’s cave home under the rock and leased the small nearby derelict airport from the Bureau of Land Management. He fixed up the airstrip and built a diner, shop, guest ranch and gas station there, turning it into a proper airport once again and the rock into a minor tourist attraction, and in the meantime he also held meditation sessions at Giant Rock to capitalize on the New Age idea that it was a sort of natural Earth power point. He also spent his free time poking around in the caves and tunnels under the rock, and it was these excursions that would take his life in a bizarre new direction.

There’s no way to really ease into it, so we’ll just come out and say it- it was aliens. Van Tassel claimed that he had not only found the strange tunnels mentioned by Critzer, but also that they were made by extraterrestrials, and through their crystalline structure he had managed to pick up messages from aliens from the planet Venus. Sometimes these incidents were just telepathic messages, but at other times he said that he had somehow astrally projected to meet the aliens themselves and ride aboard their ships. On one such occasion, an alien named Solganda brought him aboard their ship and taught him various advanced secrets on how to extend human life and heal any disease or ailment, and they also allegedly gave him blueprints for how to make a building that would serve as a “time machine for basic research on rejuvenation, anti-gravity, and time travel” that would “recharge energy into living cell structures, to bring about longer life with youthful energy.” He called this device the “Integratron,” and became absolutely obsessed with making it a reality, starting construction in 1954.

Van Tassel gathered together others who he told about his alien encounters and began work on what was to be a domed structure made up of non-ferromagnetic materials: wood, concrete, glass, and fiberglass, lacking any metal pieces whatsoever except a spinning copper wire core and a rotating metal structure on the outside he called an “electrostatic dirod.” As construction was going on, Van Tassel began holding annual UFO conventions in order to raise money for the project, with some of these gatherings attracting thousands of people, at its peak drawing in over 10,000 attendees. These conventions brought in many famous UFO contactees, and made Van Tassel so well known that he started The Ministry of Universal Wisdom and The College of Universal Wisdom in order to share the telepathic messages he was constantly receiving from the aliens, and he also wrote four books over the years, I Rode A Flying Saucer (1952, 1955) Into This World and Out Again (1956), The Council of Seven Lights (1958), Religion and Science Merged, and When Stars Look Down.

This would go one for over two decades, with Van Tassel devoting all of his time to these conventions and the building of the Integratron, but he would sadly never see it in its completed form. In 1978, just a few weeks before the machine was to be officially unveiled, Van Tassel would die from a heart attack, having never seen the fruits of all of his hard work or whether his Integratron would even work at all. To this day curiosity seekers and New Agers make pilgrimages to this desolate place, wanting to see the structure themselves or perhaps hoping to see UFOs and aliens. Whether any of Van Tassel’s visions were true or whether his machine ever had any hope of actually working, it is all a very curious tale and historical oddity that still serves to spark the imagination.